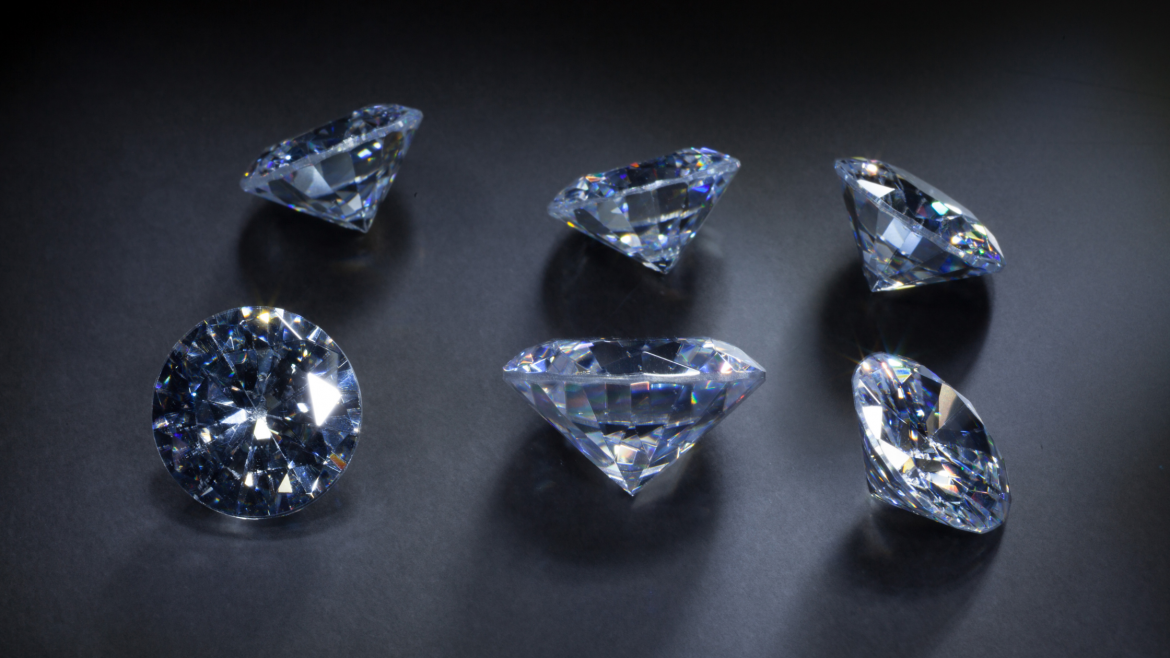 Diamonds are often considered to be the ultimate symbol of love. They can also be very expensive, which is why diamond simulants have become popular.

Diamond imitations are not diamonds; they usually look like diamond and diamond-like stones but cost much less. But what does diamond simulant mean? And what makes diamond alternatives so appealing?

What Are Diamond Simulants?

A diamond simulant is a diamond alternative that looks like a diamond but isn’t actually a diamond. Diamonds are one of the most popular gemstones in use today because they’re beautiful, unique, and extremely rare.

Because diamonds have such high worth and value compared to other gems and stones, many companies produce imitation alternatives for consumers who can’t afford or don’t want to purchase diamond jewelry.

Diamond simulants are often made with cubic zirconia (CZ), a diamond-like substance, which is less expensive than diamond and can look very similar to the real thing. Other diamond simulants may be produced from glass or quartz.

There are many reasons why diamond simulants may be preferred to the real thing:

Diamond imitations aren’t as expensive and high-quality as diamond jewelry, but they’re still beautiful and can even look almost identical to a genuine stone.

There are several types of diamond simulants, including cubic zirconia (CZ), moissanite, YAG diamond, and white sapphire to name a few common ones.

One thing to note though is that lab-grown diamonds are not considered diamond simulants.

CZ is by far one of the most popular diamond alternatives sold as a diamond simulant. In fact, it’s so similar in appearance to real diamonds that only experts can tell which is which with close observation under magnification or with a diamond tester.

Both diamonds and diamond simulants are made of carbon, but the way it is structured determines their appearance and quality. Real diamond has an extremely rare allotrope (crystalline structure) called a diamond cubic lattice, which makes it incredibly strong with high thermal conductivity and high optical dispersion that gives it fire and brilliance.

Cubic zirconia does not have the diamond cubic lattice, but its atoms are arranged in a diamond-like structure with optical properties that make it look like real diamonds when viewed from afar. It has high fire and sparkle, which makes it ideal for jewelry pieces such as earrings and rings.

On the other hand, moissanite diamond simulant has a cubic structure that is different from diamond but contains silicon carbide (SiC). Moissanite appears similar to real diamonds because it refracts light in such a way that makes it look like real diamonds when viewed under magnification or from a distance.

Adding diamond-like carbon (DLC) coatings onto jewelry pieces can also make them look like real diamonds without the high price tag of buying real diamonds which makes it an excellent alternative for engagement rings and wedding bands.

The best diamond simulants mimic the physical appearance of a natural, mined diamond. They may be colorless (color enhanced) and free from any inclusions — white to the naked eye — but under magnification, they will show flaws or bubbles that can’t easily pass as diamonds because their internal structure is different from a real gem.

The most popular diamond imitation is cubic zirconia, a man-made product. Cubic zirconia is a mixture of zirconium dioxide with traces of other metals. It is pure white and completely free of any inclusions under high magnification.

Diamonds are valued for their hardness, meaning they can be scratched by other gems (which makes them difficult to cut) but not easily chipped or broken. Cubic zirconia lacks this quality; it scratches more easily than the most common imitation on the market, moissanite.

However, people prefer CZ to diamonds because of its resemblance to diamonds. It sparkles more brilliantly than moissanite, but the brightness one sees is not a result of an actual fire within the stone; it’s merely reflections off its faceted surface.

Lastly, Cubic Zirconia is also more affordable than diamonds and this is another reason why people opt to purchase CZ rather than diamonds.

Learn the difference between cubic zirconia and lab diamonds with our guide: Cubic Zirconia VS Lab Diamond

With a hardness of around nine on the Mohs scale (diamond is ten), moissanite can be cut into shape by skilled jewelers but will not hold up to daily wear and tear as diamonds do. Moissanites are colorless in their natural state but are often treated with heat to enhance their color.

Inclusions in moissanite are more visible than those of cubic zirconia, and they can also have a green tint under certain lighting conditions. It is not as brilliant or fiery as diamond but will never shatter if dropped on a hard surface. However, it does scratch easily so special care must be taken to avoid any damage.

Non professionals can’t tell the difference between Moissanite and a diamond because Moissanite passes a diamond tester.

Both diamond simulants are more brilliant than natural diamonds but will show flaws under magnification that can be easily seen by an expert’s eye, making them not the best options for people who want a flawless stone to wear every day or on special occasions.

Moissanite is about ten times cheaper than a diamond of equal size while cubic zirconia is less than one-tenth the price of a diamond, so there are monetary incentives to choosing these imitations.

However, only diamonds have an actual fire within them that makes any gem shine and sparkle with brilliance; both moissanite and CZ will look more like glass but never achieve the same level of beauty as a diamond.

White sapphire is a natural gemstone that has been heat-treated to turn it white, but the stone will show flaws under magnification. It has a hardness of nine on the Mohs scale, which makes it harder than cubic zirconia but not as hard as a diamond.

Also, white sapphire does not look like a diamond to an expert’s eye and is less brilliant under normal lighting conditions unless heat-treated or color enhanced.

While it may not be as beautiful as a diamond, many people choose white sapphire because it looks like a natural gemstone that sparkles enough to satisfy them without costing an arm or leg.

White sapphire mixed with blue sapphire is known as the star sapphire due to its asterism, or “star effect”, that can be seen when looking at it from an angle.

Although topaz occurs naturally in yellow and brown hues, white topaz has been treated with heat to turn it colorless while blue topaz has undergone irradiation treatment to turn it blue.

Topaz is a very hard gemstone with a Mohs hardness of eight, which makes it scratch-resistant and durable enough for everyday wear but easy to damage from both direct or indirect blows so special care must be taken when wearing topaz jewelry.

Inclusions in white topaz are not as visible but can be seen by an expert under magnification. Topaz is not as brilliant and fiery as diamond, which gives it a softer appearance than diamonds have.

White topaz is often used as an imitation diamond because of its resemblance to diamonds, and because it has a lower price tag than diamonds.

As you can see from this list, there are many diamond imitations that people opt for over real diamonds due to their affordability and resemblance to diamonds; however, none of them will ever achieve the same beauty or fire within them as a diamond.

Consider the best diamond simulant for you or your partner. The gemstone industry is a lucrative one, and we want to make sure that you know what’s out there.

Diamond? Cubic zirconia? Moissanite? All of these are great options, but only if they suit your taste and budget. It’s all about finding something that will satisfy both your needs (or those of the person receiving such an impressive gift).

We hope this article helps you find just what you need.

Why Are Diamonds So Expensive?

What Is The Gemological Institute Of America?