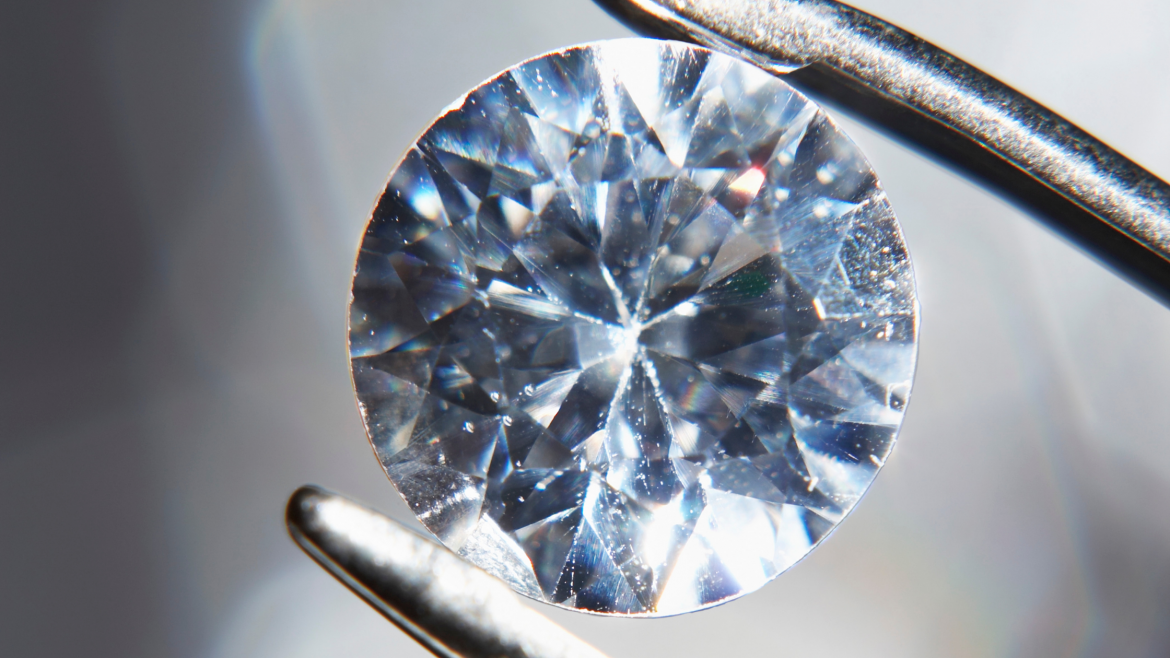 Diamonds have been prized through the ages for their beauty and rarity.  Everyone fantasizes about diamonds that are ‘big, clean, white and sparkly’.

However, truly flawless diamonds are considered the cream of the crop. They represent less than half a percent of all the diamonds that exist in the world.

Diamonds are rarely perfect and most diamonds contain what are known as ‘inclusions’. These inclusions make each diamond unique, and add to their fiery beauty.

But do all inclusions have the same effect on diamonds? Or are some inclusions worse than others? In this blog we will explore the different types of inclusions and how they visually impact a diamond’s appearance.

What Is An Inclusion?

Diamonds form inside the earth under extreme heat and pressure. Given those conditions, it’s almost inevitable that a diamond would have some irregularities or ‘inclusions’.

An inclusion is an imperfection or a clarity characteristic which is enclosed in a diamond or extending into it from the surface.

It is considered to be a diamond’s birthmark; giving each stone a unique identity.

The amount of inclusions vary in each diamond.  These inclusions make every diamond unique and one of a kind because none of them is completely identical.

When diamonds are graded for their clarity, the inclusions are assessed based on their size, number, position, type and relief.

The clarity grade is then determined based on a combination of these factors.

The size of the inclusion has a huge impact on the grading. Generally, the larger the inclusion is, the lower the clarity grade will be.

An eye-clean VS1 diamond will not have any inclusions that you can easily see with naked eye, whereas the same inclusions with a larger size will probably make the diamond an SI1.

Numerous inclusions in a diamond leaves it unattractive as well as affect its grade.

The more the inclusions or their reflections seen at 10x, the greater the effect on clarity grade will be.

Where an inclusion is located in a diamond plays an important role in how much harm it can do.

If an inclusion is located at the table facet, it is the most visible of all. When located at the girdle, it is rarely visible. Inclusions at the culet are least desirable as they reflect throughout the whole gem.

Relief is the contrast between an inclusion and the host gem.

Inclusions like crystals that are translucent or white have less impact on the gem than darker ones because colored inclusions are easier to see and might lower the grade.

It refers to the type of inclusion and its effect on diamond. Various types of inclusions impact the clarity and the grading of a gem. For instance, pinpoints have a lesser impact because they are barely visible. Other inclusions like feathers can have a greater impact as they could cause a diamond to crack.

Why Should You Avoid Certain Inclusions?

You should avoid certain inclusions because of their potential to negatively impact the diamond’s appearance, durability, aesthetics and light performance. Some types of inclusions can be detrimental to the stone’s longevity, such as dark crystals, large feathers, chips, cavity and more.

Many buyers prioritise light performance in a diamond, so inclusions that can diminish the brilliance of a diamond can be deal breakers. This is mostly caused by dark inclusions on the surface or interior that block light or prevent it from traveling in and out of the diamond at the proper angles.

Don’t let minor inclusions deter you, but the inclusions that might impact the stability of the diamond must be avoided.

A key consideration is the position of the inclusion that can cause durability issues. If the inclusion is found near a thin girdle or the diamond’s edges, this poses more risk.

Diamonds have various mineral crystals which are embedded within them as they grow. These crystals can be colorless or colored, transparent or opaque and in different sizes and shapes.

Although the majority of these cannot be viewed without magnification, a significantly sized crystal detracts from a diamond’s appearance, thus lowering its clarity grade and value.

Darker colored crystal should be avoided, since it will have more effect on the diamond’s brilliance. The light passing through the stone will be blocked and it will reduce the fire and sparkle in the diamond, thus making it appear dull.

If you decide to purchase a diamond with black crystals, make sure that the inclusions are not located anywhere visible, or can be concealed by the ring setting.

A needle is a long, thin crystal inclusion that is usually white or translucent.

It is not a big deal to have a short needle in your stone, however if it is very long and appears in clusters, it might have a detrimental effect on the stone’s clarity; as it runs all the way through the diamond and doesn’t looks appealing.

It is an included crystal that extends to the surface of a diamond. In other words, it is a crystal but it also breaks the stone’s surface. With that in mind, a knot has the potential to create a cavity, if it falls out of the stone and thus affect the durability of the gem.

A knot is oriented differently from the host diamond and so it can cause problems in the polishing process as well.

A cloud refers to a cluster of pinpoints/crystals found very close to each other.

Depending on the nature of the cloud inclusion, it can pose an issue to the diamond’s appearance and negatively affect its light transmission properties.

If a cloud is large and dense, it can reduce a diamond’s transparency and therefore its beauty and brilliance. Such diamonds will look hazy or milky and lose a lot of value.

A feather is an internal crack inside a diamond, which appears bright and glossy or transparent.

However, if the feather is dark and black, it reduces a diamond’s brilliance and interferes with the light play.

Depending upon the size & location of the feather, it can be among one of the diamond inclusions to avoid.

If it is located close to the girdle of the stone, it can pose durability issues, and the diamond’s chance to break will gradually increase.

Diamonds with a higher clarity grade of VS or above can have feathers, but those are not worrisome. However, stones with clarity of I2 and I3 have larger, eye visible feathers, that may cause problem with structural integrity.

A bearded (beard hair-like) girdle consists of multiple feathers running perpendicular to a diamond’s girdle. It often occurs in the cutting stage of the diamond.

Whilst it can be ignored when tiny, but it can’t be overlooked if the girdle is heavily bearded.

A heavily bearded girdle has so many feathers that they create a fuzzy grey fringe all around the stone that detracts from the visual appeal.

This flat, ribbon- like inclusion is actually a series of pinpoints, clouds, or crystals.  It is formed as a result of growth defects in a diamond’s crystal structure. During the formation process, a diamond may stop growing due to unfavourable conditions and twinning wisps are formed when the growth restarts in a different direction, sometimes even thousands of years later.

Extensive twinning wisps have the potential to make a diamond look cloudy.

An etch channel is an angular opening that starts at the surface of the diamond and extends into it. Besides appearing like a hollow tunnel, it can also be found as parallel lines or worm-like channels, which can be straight or curved.

With time, dirt and residues can get trapped inside these channels and can make cleaning difficult, so it’s best to avoid such inclusions.

Graining is caused by irregularities in crystal growth. This inclusion can come in multiple forms such as angular lines or curves, which can be whitish or colored.

If there are too many of this, it might give the stone a milky/ hazy texture and affect its transparency.

Depending on their severity, it can also appear like creases or reflections, making your diamond look wrinkled.

It is a shallow opening on the surface of a diamond, located near the girdle, culet or facet junctions.

A chip not only ruins the diamond’s visual appeal, but it also weakens its structure.

Once a diamond is chipped, there’s a significant risk of the chip spreading, if it is subjected to further wear and tear.

Although a chip can be regulated by re-cutting and polishing, but if it is considerably large, cutting would reduce the carat weight of the gem, causing a drop in its value.

If the cavity is under the stone’s table, it will significantly lower the clarity grade.

Inclusions such as these should be avoided, as it not only reduces the stone’s sparkle, but also weakens the integrity and durability of the diamond.

How To Fix Diamond Inclusions?

There are various treatments and techniques done on diamonds in order to get rid of unwanted inclusions, thereby improving their apparent clarity, appearance and marketability.

This technique uses an extremely thin channel of laser beam, that drills the diamond’s surface to a dark crystal inclusion. It is then burnt out.

Very often, laser drilled diamonds are further treated with an acid bath or injected with a filler material to mask the inclusion.

When laser drilling is done extensively, the network of tunnels created within the diamond can hinder light transmission and can be seen with the naked eyes.

In this type of treatment, the laser drill holes and surface reaching feathers in a diamond are filled with a transparent substance such as molten glass. The filler makes the inclusion less apparent and enhances the look of the gem.

However, the problem with fracture filling is that it isn’t permanent and can change the diamond’s sparkle or colour over time (because of the injected material).

In order to remove some of the undesirable inclusions or blemishes like scratches from a diamond, jewellers and lapidarists re-cut the stone by cutting some material from all sides of the diamond and also re-polishing it. However, re-cutting reduces the carat weight of the diamond, which reduces its size and monetary value.

Inclusions are not inherently bad. Diamonds are born with it, so almost all diamonds have some inclusions. Flawless diamonds are a rare find, and command premium prices.

Inclusions tell a unique story about the diamond’s million years long journey deep within the earth. Experts can study an inclusion and determine how the diamond formed, what minerals it was exposed to, what the growth environment was like, and more.

Inclusion infuses a unique character to the diamond and there’s actually beauty with their natural flaws.

Sometimes diamonds are purchased specifically for their one of a kind appearing inclusions.

As it is said, ‘Beauty is in the eye of the beholder’, and that’s certainly true for these unique and appealing diamond’s clarity characteristics.

What To Do With An Engagement Ring After A Breakup