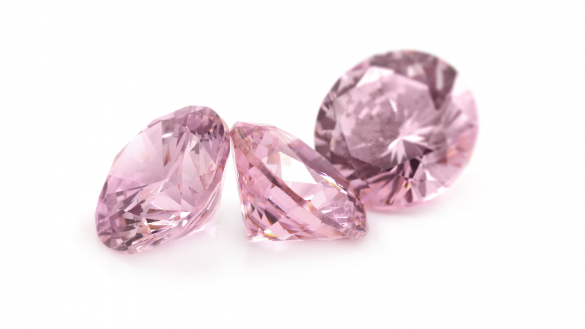 But before you go out and buy Morganite jewelry, here are a few things you should know. This article will answer the question “does morganite change color”, along with everything you need to know about Morganite.

Morganite is a semi-precious stone (jewel), a chunk of mineral crystalline solid, and a part of the Beryl family (beryllium aluminum cyclosilicate-made mineral). This gemstone is usually mined in some of the countries in the world i.e. Namibia, the United States, Brazil, Afghanistan, Mozambique, Madagascar, and few other countries. It is mainly used to manufacture various designs of jewelry and other different adornments.

The Formation Of Morganite

It comes from the beryl (silicate gemstone) family. The pure beryl has no color – mere colorless; but, if it interlinks and merges itself with manganese (a chemical element) then this mixture gives birth to the unique and invulnerable beryl – morganite. Moreover, the cesium (a silvery-golden alkali metal) with the help of manganese helps this jewel generate more hues when it is polished.

This fine gem is also named pink beryl, pink emerald, and casein beryl as it is mostly pinkish.

What Color Is Morganite?

Morganite comes in a wide variety of colors, including purple, light yellow, diamond, pink (the most desirable, romantic, and valuable color among these stones), and orange.

Morganite is most commonly purchased in its pink or diamond color because it looks like a real diamond and is very popular.

Pink Morganite one is one of the most valuable and sought-after shades of Morganite. When mined, this jewel is typically pink, but when polished, it takes on a variety of colors. This pink morganite also has several different shades including: violet-pink, peachy pink, and pale pink.

After being mined and polished, morganite takes on various colors. As a result, it has a variety of colors, such as salmon, violet-pink, and peach. But does this mean Morganite changes color? The answer is “no, Morganite does not change color!”

While mining, gemstones have irregular shapes and colors, which are transformed into distinct hues when polished. In order to use these raw morganite gemstones gemologists have to polish them which turns the irregular shapes into small and shining stones. This process will make the color and look different than when they were just being mined. But this is what will happen with all gemstones that need to be cut and polished to be used in jewelry.

Also, many people also wonder about whether Morganite would change color when exposed to different types of light like some other popular gems do. But when it comes to morganite, it doesn’t matter what light or brightness we apply to the morganite, or how we keep it, the hue won’t change.

Can You Artificially Change The Color Of Morganite?

It is possible to change the hue of pink beryl artificially, but you must have the necessary accessories to do so. By heating the jewel, the yellow color of morganite can be eliminated, and the jewel can be converted to pure pink because it has been heat-treated.

How To Tell If Jade Is Real