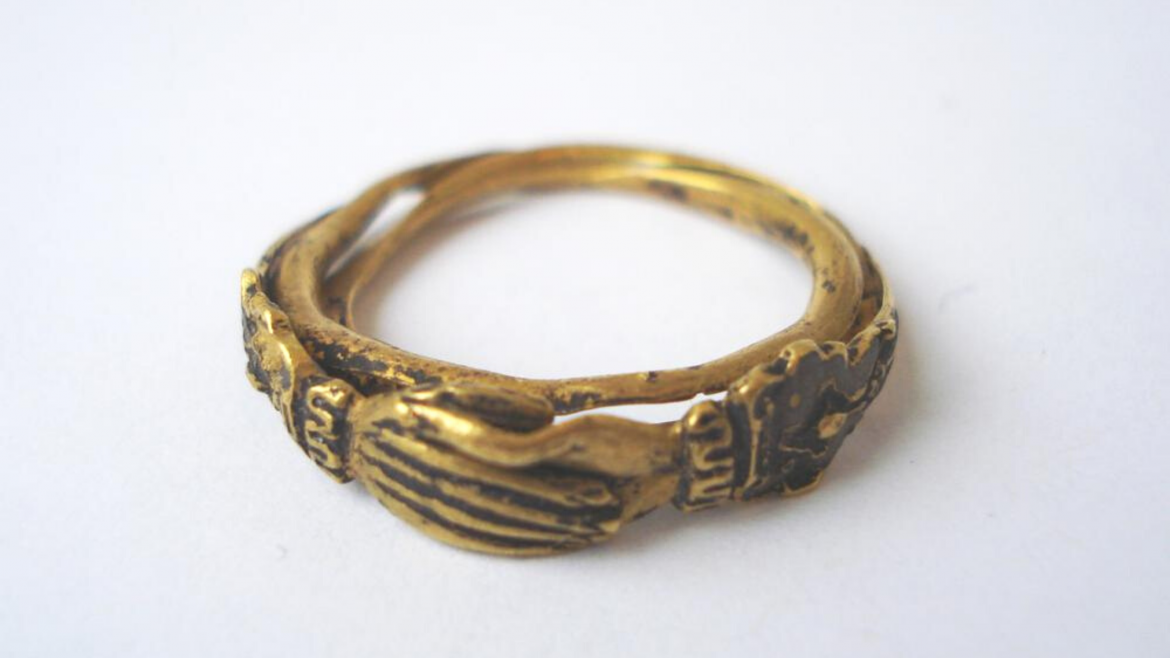 If you’re asking what a gimmel ring is, it’s two similar rings that are made to be worn by a couple. Nowadays they’re not as popular as they used to be but if you want to know about them, read on!

A gimmel ring, for those unfamiliar, is a diamond-like engagement ring that does not have a stone. It’s a very romantic custom that many jewelry enthusiasts hope gets resurrected and becomes popular again!

At the time of their engagement, lovers exchanged a gimmel or gimmal ring (also known as fede), which is a promise ring with religious significance and symbolism. Its origins are in a custom of equality and respect for both partners in the relationship, which it continues to observe.

What Is A Gimmel Ring?

A gimmel ring, also known as a twinned ring, is a ring composed of two or more separate hoops with a split shank that may be connected and worn as a single ring.

Gimmel rings are from the French and were given as tokens of love or betrothal during the Renaissance. These rings were sometimes split apart, with one half each belonging to the betrothed pair and then rejoined as a ring on the bride’s finger.

Additionally, gimmel rings were frequently adorned with gemstones or clasped hands, included the couple’s name as well as a written message about the sanctity of the relationship.

These rings acted like promise or engagement rings in the modern world. However, both men and women who are engaged each get to wear a gimmel ring. This is unlike before where only women wore such types of rings. That’s not all, gimmel rings were also gifted between men to symbolize their friendship.

The History of Gimmel Rings

The history of gimmel rings dates back to the 17th century where they were very prevalent in parts of Europe. During this time, couples wore gimmel rings to indicate their engagement together.

It was at this time as well that wedding rings had become quite a tradition, and couples wore their rings proudly. But gimmel rings went beyond simple wedding bands since they were more customizable and could symbolize different aspects of a relationship.

A two-loop gimmel ring is traditionally taken apart and worn one by each member of the union. On the other hand, a three-loop gimmel ring would see a witness take possession of the third link to keep it safe. He/she would then release the link for the reunion after the couple weds.

Who Should Wear Gimmel Rings?

Gimmel rings are perfect for couples who want to have a personalized wedding ring. Couples can decide on the style of the gimmel ring they’d like to wear by determining what material it should be made from. Popular choices include gold, silver, wood, and even diamonds.

These rings are also perfect for mixed-faith couples or those whose religions do not allow for a wedding band to be worn. Couples will thus use the third link of their gimmel ring as a symbol of unity and love without having to wait until they wed before wearing it.

Family-designed gimmel rings are also popular among groups that want something that cannot be bought in stores. The rings are a way to demonstrate the love and commitment members have for each other.

Gimmel rings come in different designs that add meaning to the wearer’s life. For example, a couple could choose a silver band with two loops on either end of the ring and engrave an inscription inside it. The inscription is usually something meaningful or personal to them such as “till death do us part” or their promise to each other.

These rings are also very popular with members of the Jewish faith. Some rings have Hebrew inscriptions on them, while others use symbols to represent certain beliefs. For example, a couple who chooses the Star of David as their symbol could wear gimmel bands that feature it beautifully engraved inside it.

Couples can choose to wear a gimmel ring on either hand. However, some people believe that wearing it on the left hand during the engagement period is a tradition only judaism follows.

The rings can be engraved with different texts, but it’s most common to use “Amor Vincit Omnia” or “Love Conquers All.” Couples can either engrave the text themselves or have a specialist do it for them.

Where To Buy Gimmel Rings?

Gimmel rings are sold in many different places, but they are most commonly available online. This allows couples to shop around for the best price on the ring that will be worn by both of them.

Couples can choose to either purchase a ready-made gimmel ring or have one custom-made for their unique relationship.

The history of gimmel rings dates back to an era when couples wore them as a symbol of love and commitment together. Today, they are still just as popular for this purpose among couples who want something personalized to wear on their wedding day.

Gimmel rings come in all sorts of designs now, so it’s easy for any couple to find the one that suits their tastes. Couples even have the option of having their rings custom-designed to feature inscriptions or symbols that are important to them.

In general, they are a unique way of symbolizing that special bond a couple has.

List Of The Top Orange Gemstones Used In Jewelry

What Do Mood Ring Colors Mean?