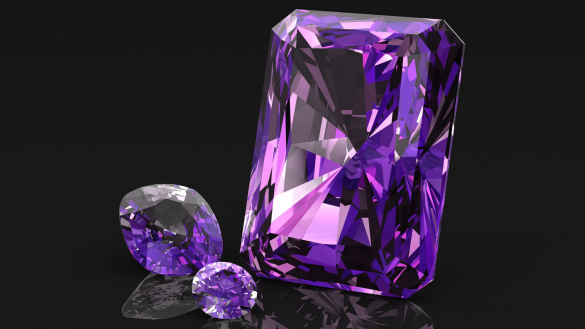 Revered by gem collectors and enthusiasts, the stone of royalty- Amethyst has added grace and grandeur to jewelry since antiquity. The ancient people regarded amethyst as a cardinal gem, treasured as highly as diamonds. Fine amethysts have adorned crowns, scepters and royal jewelry for ages.

Different cultures have ascribed various uses of amethyst which gives it a rich history and elevates its desire.

Ancient Greek thought it had magical properties and guarded against drunkenness.

Being a symbolically imbued gem, amethyst is known to bring forth purest aspirations of humans such as sobriety, chastity, bravery and contemplation.

There is a growing appreciation for amethyst among the young jewelry lovers.

With its growing demand and popularity, there are many fakes in the market to dupe the unaware buyers. It is important to identify a real amethyst from a fake and save your money.

So in this blog we give some tips and suggestions to help you in the process.

Amethyst is a variety of quartz, found in different hues and intensities of purple and violet. The finest amethyst color is a strongly saturated reddish purple or purple.

Amethyst is allochromatic in nature, meaning it is colorless in pure form and gets its characteristic color due to trace elements of iron within its crystal structure.

Amethyst forms as crystals in geodes, clusters, and as long single terminations. Whether its crystals are left natural, or faceted into magnificent jewels, it is a gem whose beauty transcends its commonality.

Until 19th century, amethyst was rare and occurred only in a few sources, when a huge amethyst deposit in Brazil came to light and the purple gem quickly became plentiful and affordable.

Gem quality amethyst is found on all continents and in various geologic environments. Some contemporary sources are Brazil, Russia, Uruguay, Zambia, Mexico, Canada and Sri Lanka.

Today, it is abundantly available and relatively affordable, even in larger sizes and good clarity.

There are certain key gemological properties of amethyst as follows, which identifies it as real.

How Is Amethyst Graded?

Dealers use four grades based on color, to assess amethyst’s quality and value.

What Is Fake Amethyst: Synthetics & Simulants

Synthetic or man-made versions of amethyst produced by the ‘Hydrothermal’ growth process entered the gem market in the 1970s.

The crystallisation takes place from a seed crystal with chemical solutions in an autoclave. The synthetic crystal thus closely replicates the purple-violet color of the natural amethyst.

As per the estimates, half or more of commercially available amethyst in the market today is synthetic and is often sold to unwitting buyers as the real thing.

Apart from synthetics, there are various other purple/violet gems which ‘look alike’ or imitate amethyst.

These include, but are not limited to: Purple Sapphire, Kunzite, Spinel, Iolite, Scapolite, Fluorite, Apatite, Rhodolite Garnet, Treated/dyed Quartz, Glass/Paste and glass-ceramic composite.

Nevertheless, these gems have notable differences in both optical and physical properties, such as crystal system, refractive indices and specific gravity, which help to separate them from amethyst.

Telling a real amethyst from a fake one requires the eye of a gemstone expert.

Most of the synthetic amethyst that entered the gem trade before the 1990s, was grown using un-twinned seed crystals, which made it possible to detect it through standard gemological tests.

However, it became complicated and challenging when twinned seeds were used to synthesize amethyst, as it caused more-natural looking growth features.

Synthetic amethyst can best be identified by employing a combination of techniques, such as advanced tools (EDXRF analysis, FTIR Infra-Red Spectra and LA-ICP-MS), inspection of twinning and conventional equipment.

Luckily, there are a few handy and nifty methods you can use, to be relatively sure whether you actually are in company of a natural amethyst.

Here are some of the things you should watch out for:

A real amethyst exhibits color zoning, meaning its color is unevenly distributed throughout.

Also, being a doubly refractive gem, amethyst shows ‘dichroism’, with the color changing from gray-violet to purple.

When you are out for your amethyst purchase, follow these two tips to check for the color-

Authentic gems aren’t perfect; they have imperfections within them. A real amethyst will have some inclusions in it, which make it distinct and serve as key indicators of natural gem.

Some inclusions exclusive to natural amethyst which you can look out for, through a 10x loupe or microscope include- Zebra stripe/tiger stripe effect, mineral crystals, liquid inclusions, goethite/hematite inclusions.

If you see round gas bubbles inside the gem, then chances are it is fake and not natural. Synthetic stones are often crystal clear, or even if they are included, the inclusions are not as irregular as they are in a natural amethyst.

A subtle but fun way to gauge the difference between a fake and real amethyst is to hold the stone in your palm and feel how warm or cool it feels. This idea is based on the thermal conductivity of different materials.

When you pick up a real amethyst, it is supposed to be cool to touch and should be cool for a few seconds before warming up according to your body temperature. Genuine amethyst can retain a low heat even when exposed to natural sunlight for some time.

If the stone warms up immediately, you can be sure you’ve stumbled across a fake one, most probably paste/glass, since it is a poor conductor of heat.

A gem’s ability to withstand scratches and abrasions is called hardness. On the Mohs scale of hardness, amethyst/quartz registered a 7. Amethyst is hard enough to scratch other minerals below 7.

Try scraping the amethyst on a glass surface and if it leaves a white streak behind, you do not have a fake stone. This is because amethyst is harder than glass. On the contrary, if the stone abrades while scratching something softer, that is a fake one.

This can be a quick and reliable test. A real amethyst has a specific gravity of 2.66, while the imitations would have a different S.G. which can be higher or lower.

If you do not have access to a S.G kit, simply bounce the stone in your hand. If the weight feels quite less for the size of the stone, it might be a fake such as glass.

While amethyst is inert or has no reaction when exposed to ultraviolet fluorescence, other imitators can have a characteristic reaction which helps to distinguish them from real amethyst. Gems such as purple fluorite and kunzite glow when exposed to UV. Similarly fakes such as glass might emit a chalky glow to shortwave UV.

How To Spot Fake Amethyst

Whenever you buy crystals, you always want to receive the real crystals and not something that has been artificially made in a lab or factory.

However, synthetic rough crystals frequently appear for sale in gemstone parcels. Here are some tips for spotting lab made rough:

A really cheap price for a gemstone parcel is a good indication that it may contain synthetics. If the deal is too good to be true, beware.

If the stones are very large and have great color, especially for the price, it is a good indication of synthetic material.

If the gemstones in a parcel look exactly alike and uniform in color, they may be synthetic. Natural amethyst crystals are almost always color zoned, with color concentrated around the tips of the crystals.

Amethyst often occurs as a six sided crystal with striations across the crystal faces. If a rough lacks crystal points or such striations, it can indicate a synthetic stone. Most synthetic material is produced in large blocks and has a flat, tabular shape.

Where To Buy Real Amethyst

Amethyst, the birthstone of February and conventional gem for 6th wedding anniversary is sure to make you love struck with its regal hue and appeal. You would not want a fake stone to celebrate the special occasions of your life with your loved ones.

All it will take you to tell if the stone is real or fake is a glance, a few inspections and aforementioned tips.

Always buy your amethyst from trusted and reputed dealers and ask for a certificate of authenticity.

What Is Stabilized Turquoise?