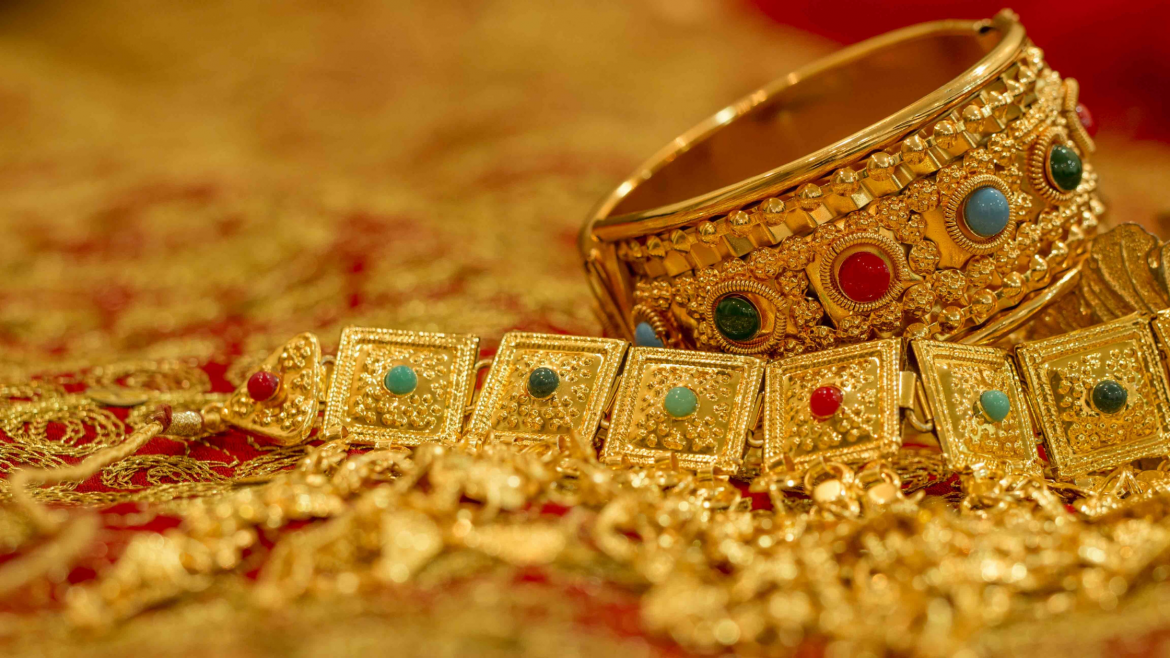 The history of jewelry is a long one. The earliest objects that can be considered jewelry date back to the Stone Age!

Jewelry has been worn for many different reasons over the centuries, including cultural, religious, and social purposes.

The history of humanity is replete with instances of jewelry’s importance. In fact, the practice of decorating oneself with ornaments dates back to pre-historic times and is one of the first steps in human evolution.

We have always found a way to appreciate the beauty of these natural presents, whether it’s shards of shell or a brilliant diamond rock.

In this post, we will take a look at some interesting facts about jewelry throughout time.

10 Jewelry History Facts You Should Know

Here are 10 facts about the history of jewelry.

The Word “Gold” Comes from the Word “Geolu”

Geolu simply means yellow and gold was the first metal to be mined. The first evidence of humans wearing jewelry dates back 40,000 years ago.

This is evident by a necklace made from drilled snail shells that was discovered in Slovenia.

The oldest found pieces of jewelry dated 3300 B.C were created by Egyptians who valued gold above all other metals as it symbolized eternal life and fertility (most likely due to its scarcity).

This gave rise to today’s practice of burial rituals. Where we still use items such as our wedding rings or lockets to represent everlasting love with people that we hold dear to us. People living during this period wore jewelry for functional reasons too.

Diamonds were First Discovered in India

Diamonds were discovered in India as early as 300 B.C. However, they were not cut and polished until much later on.

The first diamond mines in the world are thought to have been found around 800 A.D.

During this time diamonds had a value equal to that of gold or silver because it was so rare at that point in history.

However, by the mid-1700s most people traded diamonds for other goods such as spices.

Rather than buying them straight from merchants who would sell them at high prices since there were so few available.

In 1477, Maximilian gave a ring to Mary, his fiancé as an engagement ring and the tradition became more common over time.

Jewelry history facts can be found throughout Europe during different periods such as the Renaissance period, Celtic culture, etc.

Therefore, the concept of an engagement ring that started in Austria can be considered a historical fact.

Commercial farming of pearls began in the early 20th century, allowing them to be cultivated.

Pearls became readily available to everyone as a result of this invention. Today, almost all pearls on the market are cultured pearls.

The only gemstone that is extracted from a living creature is the pearl. It’s a natural stone.

Believe it or not, but the word “jewelry” comes from an old French word “Joule” or “Juwel” meaning jewel.

As the years have gone by, jewelry has become a major part of many cultures and traditions throughout history.

The oldest known piece of jewelry was discovered in Turkey back in 1991 made from an olive shell with two holes drilled through it. This is believed to be over 50,000 years old.

The Largest Gold Nugget was Found in Australia Weighing 200 Pounds

The oldest piece of jewelry was found in a cave and is estimated to be about 50,000 years old.

Jewelry has been discovered on many ancient Egyptian mummies and can also be seen throughout history depicted in paintings and drawings.

This large diamond the Cullinan Diamond and weighed in at a little over 110 carats. This is now owned by Queen Elizabeth II, who received it as part of her royal crown jewels.

Only senators were permitted to wear gold rings in Ancient Rome, according to the legislation. Silver bangles were allowed only for free people.

Only iron rings were allowed. In 23 AD, a rule was passed allowing free people to wear gold if their ancestors had been enslaved for at least two generations.

Almost 10 billion Tons of Gold is Buried in the Oceans

It is believed that almost ten billion tons of gold are buried in the world’s oceans. This means that there are nearly six million ounces of gold on earth.

This is enough to coat every inch of land on the planet with two inches worth of gold.

This information was discovered by scientists who were looking for water sources deep underground.

And underwater using complex machinery known as submersible observatories. These were equipped with chemicals capable of revealing where mineral deposits exist below sea or earth’s surface.

Including diamonds, nickel ore, and heavy metals such as platinum and gold.

It is believed this is an indication that future mining missions could yield large amounts of the wealth beneath the ocean floor if not in space.

The gold standard refers to the monetary system that was prevalent in most Western currencies.

The US dollar, for example, used to be backed by 25 ounces of pure gold. Before it abandoned the practice in 1971 due to a decline in its value against other assets.

Most other currencies in the world also used to follow gold standards till various points in time.

The reasons for abandoning this system were many and varied. But most modern economies don’t even consider returning to such a standard.

This is because it would be detrimental (or at least highly restrictive) for their overall economic growth.

Around 3500 B.C., the invention of metalworking led to a new period in jewelry history, which is known as the Metal Age, and gave way to more artistic styles like filigree and granulation.

Ancient Egyptians were the first to use granulation, a technique that involves creating small beads of gold or silver and then soldering them together into decorative designs.

This is likely the precursor for today’s micro pave setting style, which uses tiny gemstones as decoration on jewelry pieces.

Egyptians also mastered filigree (a type of metalwork) to make lightweight necklaces and earrings out of precious metals like gold and silver.

They did this by joining fine wires together with techniques such as weaving, plaiting, and braiding.

The historical facts of jewelry are vast and can’t fit in just one post or book. Jewelry is very important to many people.

It can be a symbol of love, friendship, or even power and wealth.

The 4Cs Of Diamonds