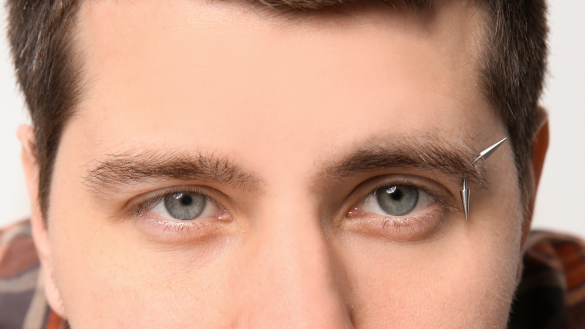 One of the most common misconceptions about eyebrow piercing is that it’s only for women. This couldn’t be further from the truth, as several men have found this to be an aesthetically pleasing and satisfying piercing.

When you’re considering getting your eyebrows pierced, there are a few things you need to know before making your final decision.

Eyebrow piercing is a divisive issue among men. Come to think of it, any sort of piercing may appear strange for a guy.

Today, we’ll look at ear piercing for males, which is a difficult topic.

Your culture has a significant role in how you feel about piercing. For someone brought up in a religious, Western family, getting an eyebrow piercing for a guy would be a big no-no.

In contrast, an eyebrow ring might be regarded as conservative, even boring, throughout various regions of Africa. Piercings are more popular among girls in most areas of the United States, the United Kingdom, Europe, and Australia.

They can also be a wonderful way to show your dedication to specific sub-groups.

With a few piercings, no one would pay attention to a rocker or punk musician, would they?

Eyebrow piercing is becoming increasingly popular among males, who are more confident in their appearance as a result of it. Piercings make a statement, just like trimming your beard or coloring your brows.

Types Of Eyebrows Piercing For Men

For guys, eyebrow piercing is becoming increasingly popular. Piercing for males isn’t as uncommon as it once was, with recent examples including Harrison Ford and Colin Farrell flaunting their piercings.

A common type of eyebrow piercing is vertical piercing, which cuts through the brow, usually with an associated ring or stud.

Let’s look at the various types of eyebrow piercing.

A horizontal eyebrow piercing is just as popular as a vertical piercing. It generally entails placing a stud near the corner of the eye’s outside edge.

You may also use rings, spikes, and other forms of adornment to create your distinct style. The far edge of the eyebrow is frequently pierced horizontally.

The majority of guys get vertical brow piercing, which is the common eyebrow piercing type. The piercing can be done virtually anywhere along the ridge of your brow.

Even better, if you love the appearance of this piercing, you may complete additional piercings at once.

Some people have just one stud, while others have numerous – up to 7 or 8 in a row.

What Is The Symbolic Meaning Of Eyebrow Piercing?

The good thing about eyebrow piercing is that it doesn’t have to mean anything. Typically, this piercing is about expressing yourself. As with any other sort of piercing or hair color choice, it’s all about personal expression.

A piercing may represent your punk-rock status or simply indicate that you’re a fun and intriguing person.

In the Western world, there is no real significance behind eyebrow piercings, although some people see it as a sign of rebellion.

What Side Should Men Pierce Their Eyebrows?

There is no hard and fast rule here, either. If you have your eyebrow pierced on the left or right, there’s no special secret message you’re sending out to males or females. When it comes to picking a male eyebrow piercing, both options are acceptable.

The ideal location to get an eyebrow piercing will vary depending on the sort of piercing you want. The majority of people start at the edge of the brow and work their way in toward the outer side of the eye. This is typical for both vertical and horizontal piercings.

The best spot for eyebrow piercing is where you want it. For example, if you have hair on the right side of your eye, then you might decide to get pierced on the left side.

The Pros and Cons Of Eyebrow Piercing

Getting an eyebrow piercing is similar to getting a tattoo or deciding to begin shaving your legs. It’s a personal decision based on your preferences.

Let’s look at the advantages and disadvantages of each program to help you make an informed decision.

Eyebrow piercings are not difficult for either men or women to obtain. The piercing procedure usually entails a specialist using a clamp on your skin to keep it in place while a needle is inserted through, forming the pierced section.

To prevent your hole from closing, the professional inserts a ring or stud into it. You’ll also receive some instructions on how to maintain your brows.

In general, aftercare for an eyebrow piercing is straightforward. However, you will be unable to replace the jewelry for at least 2-3 months.

The majority of experts believe that eyebrow piercings are less painful than other types of piercings. You’ll experience some pressure and a tiny pinch, but it won’t be excruciating.

After getting the piercing done, you may experience some swelling and discomfort.

It takes time for your face to recover, especially if there was any swelling or discoloration. Because the skin surrounding your brow is frequently tight, it will take some time for bruising and lumps to go down.

Should You Use A Gun Or Needle?

Guns are rarely the best option for piercings since they can become caught and aren’t the most dependable instruments.

Don’t just go to the mall to get your piercing done; find a tattoo or piercing parlor that does the procedure properly with a needle.

Yes, it does appear to be more frightening, but using a weapon to make a wound with blunt force – pushing a needle through the lobe tissue – causes considerably more damage than a needle.

How Long Do Eyebrow Piercings Last?

Eyebrow piercing can last a long time if properly cared for. However, it isn’t really “permanent” as many people believe.

After a few years, the hole on your face may close up if it hasn’t healed yet. It all depends on you and your anatomy.

If you get your ear piercing done by a professional and take care of it properly, you should not have too much scarring.

However, even after the piercing has been closed, you’ll have a good idea where it was. This can cause more scarring if your piercing shifts or your body rejects it.

Is Men’s Eyebrow Piercing Worth It?

For the first few weeks, you’ll have an exceptionally unpleasant area of skin on your face, and there’s always the danger of infection, so be extra careful when cleaning your brow.

Another thing to consider is that eyebrow piercing may be more expensive than other piercings. However, you do get what you pay for – better piercings are more costly.

If you’re interested in men’s eyebrow piercing and don’t mind enduring the pain while your piercings heal, nothing is stopping you from doing it.

Yes, it will be unpleasant at first – but when it has recovered, it should look fantastic.

Overall, men’s eyebrow piercing is a great alternative to ear piercings. They are subtle and can be hidden if you work in an environment where body piercing is not appropriate.

They also provide another opportunity for self-expression, as well as being more socially acceptable than other forms of male body modification.

If you’re considering eyebrow piercing for yourself or somebody else, then it would be best to first research the procedure thoroughly so that you know what to expect.

What Is A Box Chain Necklace?

List Of The Top Purple Gemstones Used In Jewelry