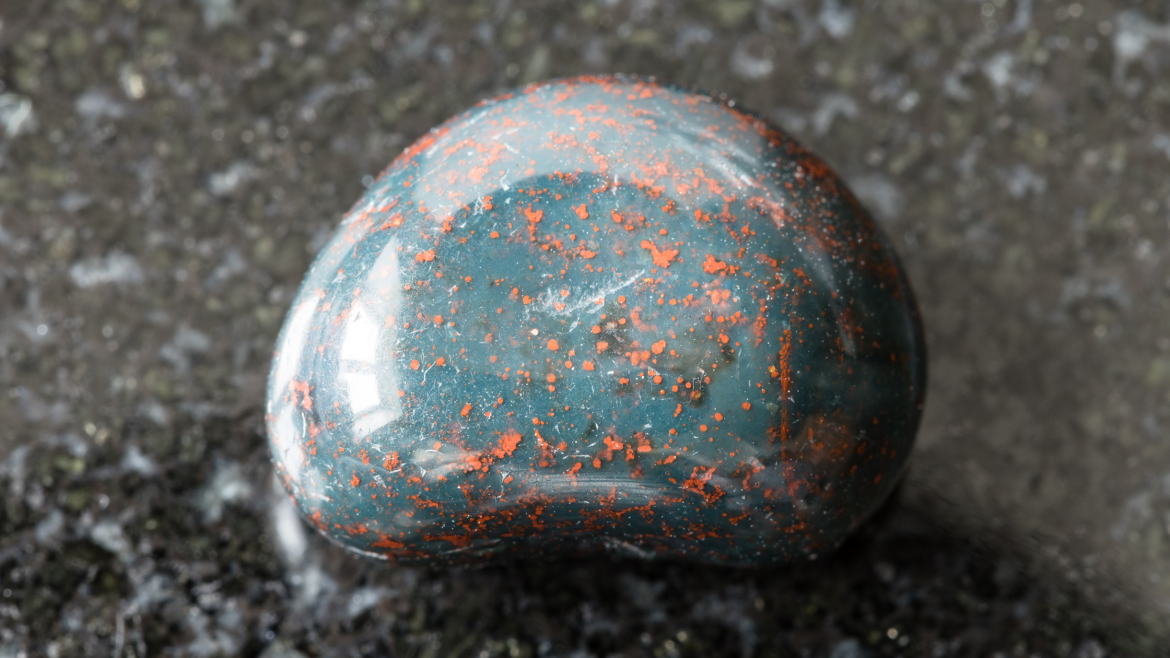 Bloodstone is a powerful stone associated with courage, protection and divination.

Its striking color combination and affordable price make it a favorite of gem connoisseurs and crystal healers.

Throughout history, Bloodstone has been believed to possess talismanic, metaphysical and healing properties. It protects the wearer from danger, promotes calmness, bestows success and acts as a grounding stone.

In this blog, we explore everything you need to know about Citrine- its meaning, symbolism, properties, sources, value factors and care and cleaning.

Bloodstone is a member of the chalcedony family, with a very distinctive look.

Also known as Heliotrope, it is an opaque dark green jasper with spotted red flecks, colored by iron oxide.

Appearing dark and nondescript at first sight, bloodstone has all the exciting features upon closer examination.

Its bold coloring and unusual patterns have intrigued people for centuries.

Bloodstone is the traditional birthstone for March.

It was attached to March because of its association with the Roman God of wars, Mars, the origin of the month’s name.

How Did Bloodstone Get Its Name?

Bloodstone’s name comes from the speckles of red iron oxide.

These red spots have the appearance of blood, giving the stone its descriptive name.

The ancient Greeks named it Heliotrope (‘helios’ meaning ‘sun’ and ‘trepein’ meaning ‘turner’) because they observed that it flashed scarlet when they lowered it into the water and pointed it towards the sun.

Bloodstone has been appreciated for more than 3,000 years.

The Egyptians gifted bloodstone to kings and pharaohs, believing it had the power to calm their tempers and dispel wrath.

In ancient Babylonian times, warriors carried amulets of bloodstone onto the battlefield as magical first aid to stop bleeding wounds.

It was also supposed to encourage bravery when faced with conflict.

People of medieval Europe honored bloodstone as a talisman that stirred passion and brought healing.

It was carried by those who wished to overcome their enemies, open locks and even break prison bonds.

Legend has it that at the crucifixion of Jesus Christ, his blood dripped from the cross and seeped into the green earth, forming these dark green stones with red markings.

What does Bloodstone Symbolize?

Bloodstone symbolizes courage, strength and the ability to overcome obstacles.

It is believed to attract good fortune, riches and fame into the wearer’s life.

A hero’s gemstone, it is frequently seen in armor’s breastplate and on swords for its power to arouse bravery and promote victory.

Bloodstone has long been associated with good health and well being primarily because of its color.

Though the red flecks are tiny, yet they are powerful, and the complementary green is a balancer.

The iron content of the red in this gem resonates with the iron in our body’s circulatory system, and the quartz base in which it is found is stabilizing and empowering.

The ancient Greeks saw bloodstone’s green color as the symbol of the Earth, embodying its strength and vitality.

It fosters a deep connection to the safety and nourishment of mother Earth.

Where Is Bloodstone Found?

Bloodstone was initially mined extensively in India- but the largest deposits are now found in Brazil and Australia.

Common and inexpensive, this gemstone is found throughout the world, such as China, Russia, Germany, South Africa and the U.S states of California, Nevada, Oregon.

How To Grade Bloodstone’s Quality

The spots can also be yellow, brown or multicolored.

The red spots result from iron oxide inclusions, while the green base color comes from minerals chlorite or hornblende.

While the green color connects with the energy of physical growth, the vividness of its red inclusions brings in vitality and strength.

Bloodstone is porous and relatively soft so for this reason it is generally fashioned as cabochons.

It is also cut into beads but is most often used as a sealstone and cameos.

A gem’s clarity is the lack of inclusions or blemishes.

However, bloodstone’s beauty comes from its flaws.

It’s a heavily included stone with multiple mineral inclusions, giving it the color and identity.

What are the Varieties of Bloodstone?

Various varieties of bloodstone can be found based on the color and origin, such as: –

A beautiful teal to blue-green jasper speckled with red, white or yellow.

A dark green jasper with red dots dispersed throughout.

This variety is grayish and is transparent rather than deeply opaque.

It is an African jasper with a soft black to gray color.

It is another variety of chalcedony which closely relates to bloodstone.

It is also green but sometimes has yellow spots.

Use of Bloodstone in Jewelry

Wearing bloodstone in jewelry helps to harness its powers.

Rings of this gem were popular among the ancient Egyptians. They liked to wear sich rings on their thumb, perhaps because the thumb is said to be under the influence of Mars- the ruling planet of this gem.

In modern jewelry, bloodstone is fashioned as cabochons that showcase its characteristic specks of red.

This gem is commonly carved as beads for necklaces that can be worn as lucky charms.

Bloodstone is also used for men’s jewelry such as signet rings.

It is a favorite stone with engravers who engrave crests and monograms upon it.

What are the Healing Properties of Bloodstone ?

Bloodstone is the go-to stone for physical ailments.

How To Cleanse Bloodstone?

Bloodstone should be cleansed after each use, especially before being used for the first time.

To effectively cleanse it, you have several options to try:

Water- Bloodstone should be cleansed under warm lukewarm water with a drop of detergent and water softener.

It’s important to rinse the stone well in clear water as the soapy film can diminish the stone’s luster.

Sunlight- Bloodstone can be charged in the sun to absorb active healing energies.

You can leave the stone under the warmth of sunlight for a couple of hours, from dawn till afternoon.

Incense- You can smudge heliotrope in incense smoke or sage.

Wave the smudge sticks over the stone and circle it anti-clockwise to create a spiral.

Place it on a plate and direct the smoke to encircle the crystal.

Bloodstone is an influential crystal companion to add to your collection.

It symbolizes longevity, health and abundance.

Today crystal healers use bloodstone to strengthen the blood and kidneys and to cleanse subtle energies.

This restorative stone brings recovery from physical and emotional wounds, stimulates our energy system and helps promote circulation of blood.

This gem is a companion of hardship and a touchstone of courage.

The way its bright green and red colors fuse together turns your life force back on.