What Is A Step Cut Diamond? 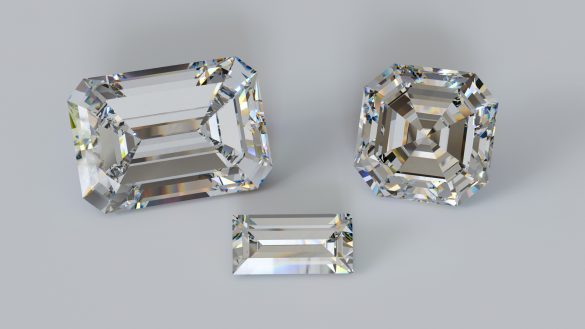 When most people ask “What is a step cut diamond” they tend to think that they are asking about a singular type of cut like a round or solitaire. But, that is where they are wrong. A step cut is not just a type of cut but it is actually a family of diamond cuts that include. the popular emerald cut along with a few others. For many years the step cut died down in popularity, but in the past decade we have seen the popularity of all step cut diamonds rising.

That is why in this article we are going to tell you everything that you need to know about step cut diamonds and why they might be a good choice for your next diamond ring.

What Are The Characteristics Of A Step Cut Diamond?

When it comes to the step cut diamond family there are a few characteristics that make them similar. The first of which is that all step cut diamonds are either square or rectangular in shape. And lastly, step cuts have eight rectangular facets that are cut parallel to the girdle of the diamond. This look creates a hall of mirrors look that draws the viewer’s attention to the center and makes the diamond appear larger than it actually is.

Because of these two features you will notice that all of the diamonds even though they are completely different have some distinct similarities in their overall look.

So if you like the angular look for your diamond, then one of the step cut diamonds might be a good choice for you.

Why Are They Called Step Cut Diamonds?

The reason for the name step cut diamonds comes from the look of the cuts of them. This is because they have large facets running parallel on the diamond that look similar to steps on a staircase or something reminiscent of an aztec temple.

Now that we know step cut diamonds are not just one shape but a whole family, we now need to look at each of the different step cut shapes and what makes them unique.

Although baguette cuts are not nearly as popular as emerald cut diamonds, you do still see them used very often as a cut for side stones on rings. The reason why this cut is not as popular is due to the cut having fewer facets which lead to it looking thinner. And because of this most people prefer the emerald cut because it has a larger appearance. But if you want to add side stones to your ring, the baguette cut is always a fantastic option.

The asscher cut is similar to the other step cuts but what makes it very unique is that due to its square shape and cropped corners that reflect light and sometimes give the appearance of an “X” in the center of the diamond. Because of this unique look, many people love it an others hate it.

Just like the baguette cut, the triangle cut is more popular as a side stone than it is as center stone.

The shield cut diamond is very similar to the triangle cut but the major difference is that the tip is cut off. Due to the tip being cut off, the diamond roughly resembles the shape of a shield.

Another type of step cut is the trapeze cut also known as the trapezoid or trap cut. This cut is four sided and is primarily used as a side stone.

Among all step cuts, the carre cut diamond is the least common cut. When a Carre Cut is viewed from above, it resembles a pyramid with its square faces and longer sides running along its length.

The History Of Step Cut Diamonds

What makes step cut’s so interesting is that they are one of the oldest types of cuts in history. These types of cuts are first seen as early as the 1500’s with the table cut. But in the 1920’s the emerald cut was first coined and was first used on emerald gems.

Later on during the 1920’s rapidly grew in popularity during the era of art deco jewelry that emphasised geometric shapes. But during this time the only new step cut that was invented thas the baguette cut.

Then in the mid to late 1940’s, step cut diamonds saw a steep decline in popularity only to rise back to stardom in today’s times.

How To Choose The Perfect Step Cut Diamond

If you have decided on a step cut diamond for your next ring then there are a few things that you need to consider when trying to choose the perfect diamond and we will go over them in this section:

The Clarity Of Your Step Cut Diamond

When choosing the perfect step cut diamond, the most important factor is the clarity of the diamond. The reason for this is that due to the flat surfaces of the facets on the diamond, this makes it much easier to notice diamond inclusions.

Now that you know the right clarity to look for you also need to know about the grading of the diamond. This is so that you can get a diamond that will sparkle in the light like you have always dreamed.

When looking at the grading, Excellent (EX) or Very Good (VG) will have your diamond sparkling in the light.

The Color Of Your Step Cut Diamond

The last thing that you want to consider when choosing a diamond is the color. Just like the clarity of the diamond you will want to make sure that your color is great due to the step cuts showing more imperfections.

Because of this we recommend that whatever color you choose, talk to a professional jeweler to help you find the perfect color.

Should You Choose A Step Cut Diamond?

Choosing a cut for your diamond can be very difficult but ultimately it is up to you. When it comes to diamonds it is all about preference and what makes you happy, so do not worry about the popularity of the diamond or if it is trendy or not.

Where To Purchase A Step Cut Diamond?

If you do want to purchase a step cut, the good thing is that most jewelers will have step cut diamonds in shop or will be able to cut a diamond to your liking. So there should be no issue with getting the perfect ring made!

Can You Wear Your Diamond Ring In The Shower?

What Does It Mean To Be A GIA Graduate Gemologist?