What Is A Trillion Cut Diamond? 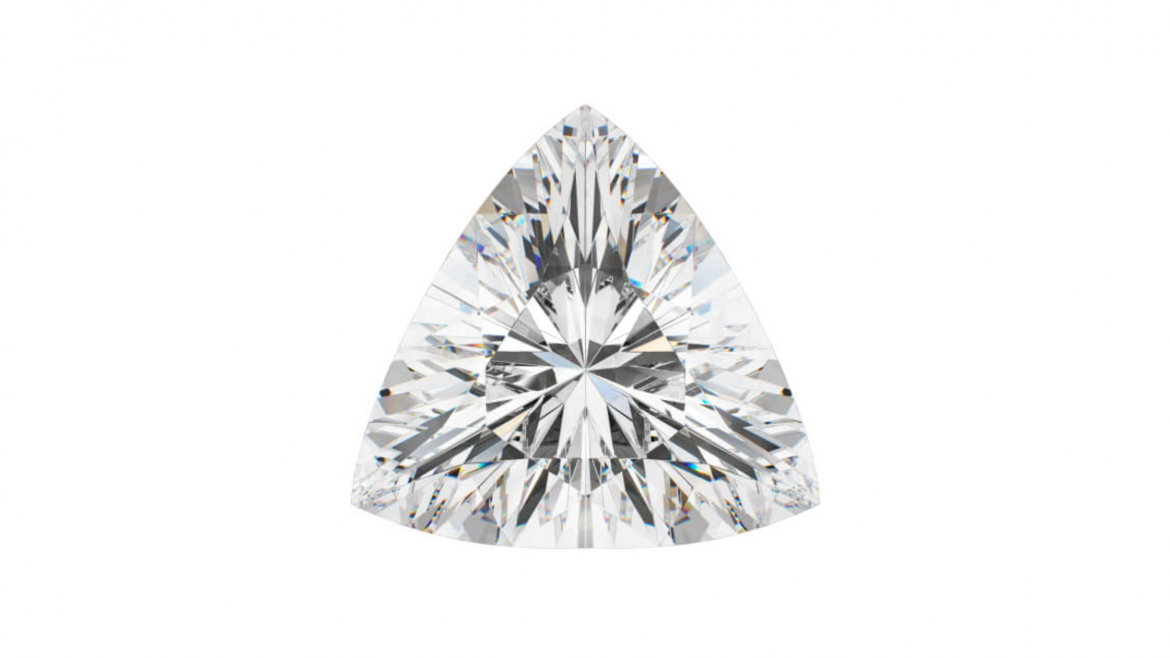 Unconventional diamond cuts are putting a playful spin on classic diamond jewelry, with their innovative shapes and breath-taking beauty.

When it comes to unusual diamond cuts, the modified triangular cut, popularly known as the “Trillion” cut is one of the most eye-catching.

The trillion cut is often relegated to a side stone status but now it is becoming more high profile. If you are looking for a diamond that is exclusive and something out of the ordinary, then the trillion cut might be just the one for you!

Its impressive brilliance, great fire, visually striking appearance and chic geometric pattern gives it a powerful quality to accentuate the overall aesthetic of the jewelry.

In this blog we discuss everything you need to know about this fancy cut, its history, characteristics, value factors, pros-cons and some of the most famous trillion cut diamonds.

What Is Are Trillion Cut Diamonds?

A trillion cut diamond, also referred to as a trilliant cut, is a diamond that’s cut into a triangular shape. It has three sides of equal length, with a flat table, faceted for fiery brilliance.

The ‘trilliant’ name comes from a combination of the words, ‘triangle’ and ‘brilliant’.

Trillion cut diamonds thus have the advantages of radiant cut diamond with the added benefit of a triangular shape.

Unlike most diamond shapes, the trillion cut is more commonly used for side-stone

Diamonds than for center stones.

When used as a center or stand-alone diamond, trillions will often have convex sides with extra facets. When used as side stones, the outer edges are usually made flat.

Over the years, numerous variations of the trillion cut have been produced, often with different shapes and facet counts.

Most of the trillion cut diamonds available in the market come with 31 or 50 facets.

History Of The Trillion Cut

The trillion cut is a relatively contemporary diamond shape, with its history dating back to the 18th century, Amsterdam when the Asscher brothers developed the original triangular cut.

Encouraged by the design, Leon Finker, a New York based diamond merchant created the modern version of the cut and named it “Trillion” in the early 1960s.

Almost at the same time, Henry Meyer Diamond Company developed a very similar cut, which they registered under the trademark “Trilliant”, to underline the cut’s brilliance.

Thus, Finker relinquished the name and his new patent was renamed “Trielle”.

Since then, hundreds of variants of the triangular cut have emerged over the years and almost all are known as Trillion.

How To Cut A Trillion Shaped Diamond

The trillion cut is trickier to cut than other cuts and requires a lot of precision.

It’s very easy to chip a trillion cut, both during the cutting or polishing phases, and when setting it into a piece of jewelry, so extreme care should be taken.

Trillion cuts are typically shallow compared to other stones, but it’s important not to make them too shallow or else they will lose their brilliance and fire.

Only diamond rough with very specific shape and parameters could be effectively turned into a good triangular brilliant cut.

What To Look For When Choosing A Trillion Cut Diamond

There are many variations of the triangular cut and thus it is difficult to establish exact parameters of a perfect cut. This makes the beauty of the cut very subjective.

The following factors must be taken care of when choosing a trillion cut diamond:

One of the most important things to consider before buying a trillion cut diamond is its shape. This is because the shape of the diamond will have a major impact on the brilliance and fire of the stone.

Symmetry defines the overall beauty and aesthetics of this cut. The more symmetrical the facets, the more beautiful the stone.

The diamond should be cut with three exactly equal sides. The facets on right and left halves should have the same shape and size and all the points of the facets should meet.

Trillion cuts are known to conceals inclusions and blemishes well.

Because trillion cut diamonds are mostly used for settings, a very high clarity grade isn’t important and there is no need to overpay for a diamond that has a flawless clarity grade.

Instead, its recommended to choose diamonds that are eye-clean, meaning they don’t have any inclusions or blemishes that are visible to the naked eye.

Choose a diamond that looks colorless in relation to the setting. As it is commonly selected as a side stone, it is more likely that color will not be the primary concern. Thus, there’s no need to pay more colorless grades such as D, E, F.

Color expectations range between H+ for white gold or platinum pieces and can drop down to a J and above range if the setting is a bright yellow or rose gold.

Unlike other diamond cuts, trillion cut diamonds do not have specific guidelines to determine cut quality, due to their unique yet complex structure.

Here are general guidelines to help evaluate the cut quality of the trillion cut:

Depth is an important factor to consider in trillion cuts, as this can greatly affect the fire and brilliance of the stone.

Trillion cut diamonds are often cut quite shallow. This is helpful for creating the illusion of a larger diamond, as more of the diamond’s weight is distributed horizontally.

An overly shallow cut may affect the diamond’s brilliance, giving it a less impressive appearance, light leakage or unattractive patterns. Because of this, it’s best to avoid stones that are cut very shallow. Instead, look for moderate depth like 35 – 46% of the diamond’s width.

A ratio between 1.0 and 1.1 is most desirable for trillion cut diamonds.

Trillion cut diamonds with a higher or lesser length to weight ratio might not be able to hide inclusions well.

When it comes to length and width proportions, it all depends on whether the cut is intended for a center setting or will be shown off on the sides.

The table facet should range between 56 and 66% of the total width of the diamond. If the table is too large or too small, the diamond will not reflect light optimally.

What Is The Best Setting For A Trillion Cut Diamond?

Trillion cut diamonds make for striking accent stones complementing the main stones in rings and other jewelry, although they also make for a unique solitaire, considering their unparalleled brilliance and fire.

When a larger trillion cut diamond is intended to be used as a shiny center diamond in a solitaire ring, it will typically have 50 facets. Center trillion diamonds will also usually have a light curve or convex shape to maximize the diamond’s perceived size.

When a trillion cut diamond is intended to be used as a side accent diamond, it will typically have 31 facets with concave and pointed edges.

The setting style can be anything from a simple solitaire with halo and pavé diamonds, to an asymmetrical two-stone ring. One of its most striking characteristics is that when set in a three-stone setting, the stones are accentuated and the whole piece stands out strongly. Together with a round or cushion cut, it can be one of the most impressive combinations in this type of engagement ring.

Because of how easy the trillion cut is to chip, it’s extremely important for its setting to offer excellent protection.

Ultimately, your dream ring should be your call, just make sure your trillion cut diamond is set with its points protected, such as in V-prong or protective 3-prong halo setting.

This shape has its distinctive advantages and disadvantages that can help you decide if it is your ideal alternative. All of its drawbacks can be worked around, so don’t let them stop you!

Because of their triangular shape, trillion cut diamonds are prone to chipping at their pointed ends.

V-prongs are the best for a trillion cut stone as they wrap the tips of the stone and protect them. Standard prongs can work to an extent, but they won’t fit too well and the stone will be at an increased risk of chipping.

Where To Buy Trillion Cut Diamond

Jewelry featuring this unique and unconventional type of cut, especially as centre stones isn’t particularly common and is rare. As such, most diamond vendors don’t stock loose trillion cut diamonds.

If you’re looking for a side-stone engagement ring that features trillion cut diamond accents, buying from a trusted and reputed vendor is recommended.

There is a wide selection of online jewelry shops with lower prices. A legit online diamond vendor offers diamonds graded by the renowned gemological labs, such as the GIA.

Listings come with the full details about the diamond including the certificate. Every diamond that is graded by GIA has a unique serial number, and many of them are laser inscribed on the diamond’s girdle.

The Moussaieff Red (formerly known as Red Shield diamond) is one of the famous trillion cut diamonds.

It weighs 5.11 ct. diamond with a triangular brilliant cut, rated in color as Fancy red by the Gemological Institute of America.

The diamond was discovered by a Brazilian farmer in the Abaetezinho river in 1990.

It is the world’s largest known red diamond, the rarest of them all!

The Ocean Dream is a diamond measuring 5.50cts, rated in color as fancy vivid blue-green by the Gemological Institute of America. It is a fancy trillion cut, with a clarity grade of SI1.

It was sold at Christie’s Geneva auction, May 2014, for whopping $ 8.8 m. achieving a new world record for a blue-green diamond.

The Ocean Dream is the first and one of the only natural diamonds known to GIA to possess a blue-green hue, making it one of the rarest diamonds in the world.

What Is The Most Expensive Diamond Cut?