What Is An Old Mine Cut Diamond? 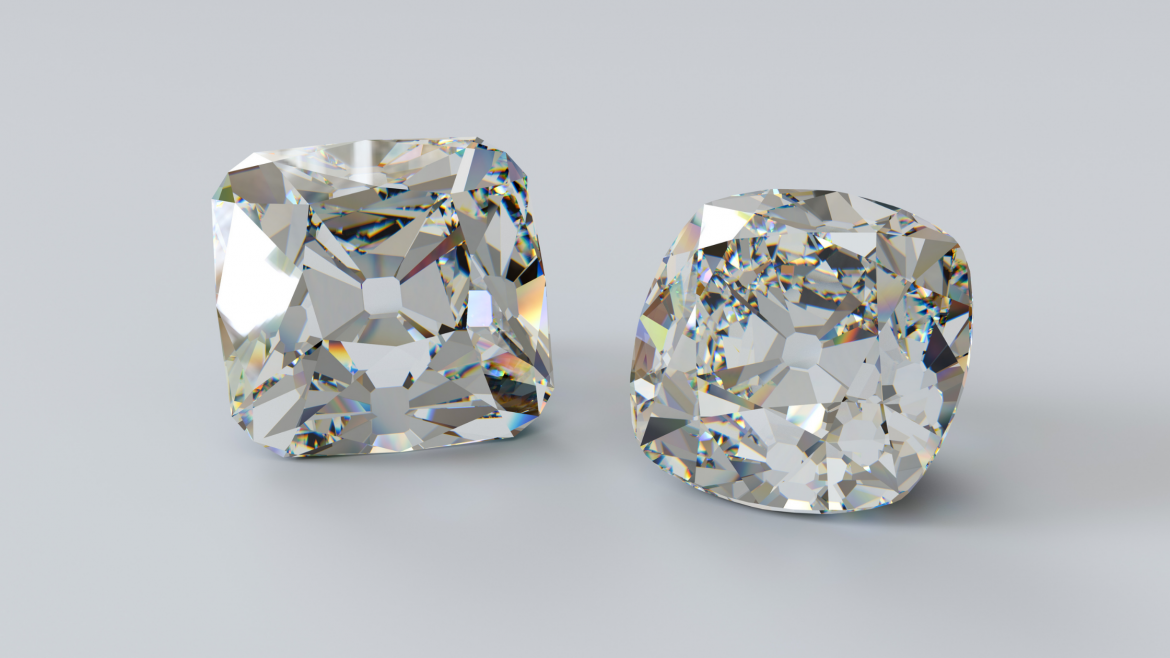 Vintage cut diamonds have risen in popularity over the recent years due to their desirable distinctive elegance and a gentle look. The “Old Mine Cut” (also known as the Old European Cut) is a quintessential example of such diamond cuts with antique or vintage qualities.

Almost every famous diamond, be that Koh-i-Noor, Cullinan, Regent or Hope has the Old Mine cut. An old mine cut diamond evokes the glory of the past and enchants with its alluring charm, beauty and mystery.

If you’re looking for an engagement ring that’s out of the ordinary, the Old Mine cut offers a great choice for someone who wants to stand out from the crowd.

In this blog we explore what the old mine diamond cut is, it’s evolution, characteristics, and value assessment, which will help you buy a high quality old mine cut diamond.

What Are Old Mine Cut Diamonds?

‘Old mine cut’ is an antique diamond cut that rode a wave of popularity from the early 18th century to the late 19th century.

Also sometimes referred to as ‘old miners’, it is one of predecessors to the modern round brilliant cut diamond.

The old mine cut was perhaps the most common diamond cut used in Georgian and Victorian era jewelry. Each stone is endowed with its own unique character and tells a story, unlike the modern machine-cut stones.

The cut features 58 facets like today’s round brilliant cut but were more cushion shaped than round. Their organic shape has more depth than modern cut diamonds. Old mine cut diamonds are lumpy in appearance, with high crowns, small tables, deep pavilions, and large culet.

Some confusion surrounds the term ‘old mine cut’, especially as the term has evolved over the years. Originally, it meant brilliant squarish shape cut diamonds that originated in Brazil or India. Then, as African mines began producing diamonds of higher quality, the term was applied to any diamond with exceptional color and one that had the older style cut.

The term is more broadly applied now, with the country of origin not being so important as the age, cut and cutting method.

Evolution Of The Old Mine Cut

The evolution of antique diamonds spans over centuries. Until the early 20th century diamonds were shaped, cleaved, cut and faceted by hand alone, using techniques that are not used frequently today, and did not comply with the contemporary rules about the number or angle of the facets.

The results were dependent on the available tools and skills of the cutters.

Such vintage diamonds possess shape, facet structures and dimensions that captured the trends of the bygone era.

The old mine cuts from 100-plus years ago were cut by manual power, not electric.

The diamond cutters shaped old mine diamonds by following the natural octahedral shape of the diamond crystal, laboriously grinding two diamonds together to achieve the desired shape, and a polisher then polished the facets.

Features Of Old Mine Cut Diamonds

Some of the most notable features which provide Old Mine Cut diamonds a distinctive look are as follows:

The stone’s shape is quite eye-catching. The old mine cuts are usually thought of as classic almost-square shaped diamonds.

However, there are several other cuts which come under the banner of old mine cut diamonds, such as antique cushion, emerald, asscher and marquise cuts.

The stones have a bulky uneven shape.

Old Mine cut diamonds have 58 facets – the same number that the most contemporary cuts have.

The diamonds were measured by eye and cut by hand, hence the Old mine cuts are not very symmetrical. The asymmetrical placement of crown & pavilion facets need to correlate in order to propagate light back to the viewers.

Old mine diamonds have a small table facet. This is obvious when viewed from above, particularly when placed next to a modern round brilliant or cushion cut diamond.

With a high crown and small table, an old mine cut stone looks larger and gets a high, domed look.

Unlike most contemporary cuts, old mine diamonds typically possess a high crown (upper part of the stone, above the girdle), with steeper crown angles and a deep pavilion (lower part, below the girdle).

The girdle encircles the diamond between the crown and pavilion. The girdle of old mine cuts can be inconsistent, and very thin in places.

From a side view, such diamonds have a square shaped girdle, which is often frosted and unfaceted unlike modern cuts.

The culet is the facet which is at the bottom of the diamond. Most modern cuts have a pointed culet.

However, old mine diamonds have a large and open culet, which is quite noticeable. A large culet causes more light leakage through the bottom of the stone, which in turn creates a dark circle when viewed face-up.

How To Choose An Old Mine Cut Diamond?

Shopping for an old mine cut diamond is not quite a simple task. Because these diamonds are antique and highly sought after, there are various factors which establish its value.

When such pieces are offered for sale, it is their ancestry and provenance that dictates their price.

Why Are Old Mine Cut Diamonds Gaining Popularity?

Fashions come and go. At the moment, the demand for vintage styles is enormous, and nothing says antique better than old mine cut diamonds. Old mine cut diamonds are now more desirable than ever, and their unique light reflecting properties are highly treasured.

Jewelers around the world are witnessing a growth in the popularity and sale-ability of Old Mine cuts. This is due to many factors, including:

Where To Buy Old Mine Cut Diamonds?

Old mine cuts have a huge fan base not only for their rarity and intrinsic value but also because they offer an unconventional option for your standard diamond jewelry.

Since these diamonds were cut & fashioned long ago, their availability is limited, which only adds to their storied and mysterious allure.

The best chance of finding a genuine old mine cut diamond is probably with a jeweler who sells antique jewelry or a speciality gem trader who specializes in this niche.

Because of the slightly rustic appearance of old mine cut diamonds and the modern penchant for round cut, a lot of them have been re-cut. The aim was to make them more appealing to a marketplace which demanded cleaner and standardized diamonds.

They have a squarish outline and attractive brilliant cut facets.

This historic old mine cut colored diamond, originating in the Golconda mines, was sold by Christies on November 14, 2017.

This notable diamond takes its name from Cardinal Mazarin, the Chief minister of France (1642). He assembled a collection of 18 exceptional gems. Of the 18, eight were square cut diamonds and the largest of these was known as the Grand Mazarin.

This natural fancy light pink diamond possesses an antique old mine cutting style which is rarely encountered in the gem trade today.

It was sold by Christies in the Magnificent Jewels Auction in Geneva, 2001

Presently known as ‘The Wittelsbach-Graff’, it is one of the earliest documented old mine cuts. It is a Fancy deep grayish blue diamond which originated around mid-17th-century. Laurence Graff purchased this diamond in 2008.

Why Does White Gold Turn Yellow?

How Are Diamonds Formed?