What Is Diamond Clarity? 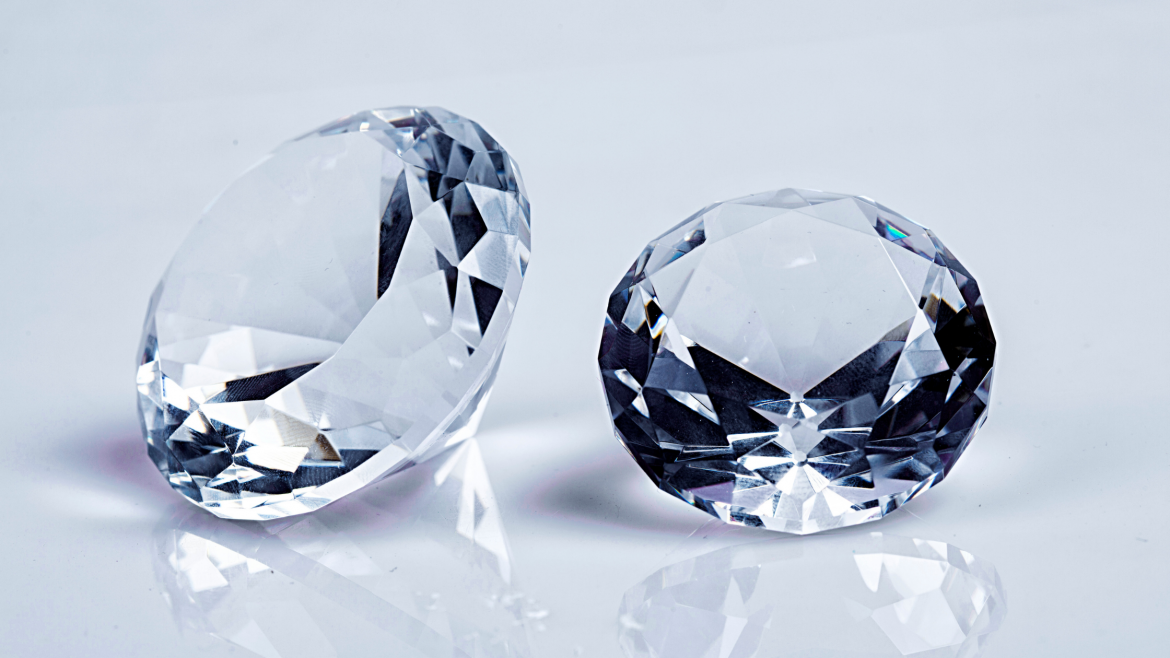 Diamonds are regarded as the ultimate expression of love, glamour, wealth and refinement. As a commodity, they hold significant value, which is influenced by various quality factors.

These are known as the 4Cs.

Diamond clarity is one of the crucial quality factors in the 4Cs (the other three being color, cut and carat weight). There are different clarity grades of diamonds and each grade has a different value.

So, what is clarity? How does it affect diamond beauty and value? What is the globally accepted standard to describe clarity? And How do graders assess diamond clarity?

In this blog we explore all this and much more, so that when you buy diamonds, you are much more informed and get the most out of your money.

What Is Diamond Clarity?

Clarity refers to how clean or clear a diamond is. By definition, diamond clarity is the relative absence of clarity characteristics.

While the internal characteristics are called inclusions, the external or surface irregularities are called blemishes.

A clarity grade describes the diamond’s overall appearance in relation to the number of both internal and external imperfections in the stone.

No diamond is free from flaws, even though to the naked eye many of them appear to be. The closer to perfect a diamond is, the higher its value becomes.

Diamonds are formed in the earth’s mantle layer at depths ranging between 80-120 miles under tremendous pressure, and they face extreme heat up to 2,200 degrees Fahrenheit.

Since diamonds form under such harsh conditions, only rare diamonds emerge in a flawless condition.

Most often diamonds are imperfect and contain varying amounts of clarity characteristics, which can be classified as ‘inclusions and blemishes’. Inclusions can be totally enclosed within the diamond or they can extend into the diamond from its surface. Blemishes are confined to the diamond’s surface.

In a diamond, the inclusions could be anything from nearly invisible specs, clouds of minuscule crystals, included minerals, wispy feather like fractures, or larger formations.

These inclusions are a birthmark of the diamond’s origin and a source of fascination and beauty. The external blemishes include scratches, pits, nicks, chips, extra facets and naturals.

Why Is Diamond Clarity Important?

Clarity plays an important role in determining a diamond’s overall beauty and ultimately its value. It has a great impact on a diamond’s fire, brilliance, scintillation.

A diamond’s clarity will affect how it sparkles under light — and fewer inclusions means the diamond will shine more brightly. On the other hand, a diamond that is heavily included will look dull even if it has an ideal cut.

Clarity characteristics help gemologists separate diamond from synthetics and simulants. They can also provide scientists with valuable information about how diamonds form deep under the earth.

What Factors Impact A Clarity Grade

While evaluating the clarity grade of a diamond, various factors are taken into consideration. These involves determining the number, size, relief, nature, and position of the inclusions and blemishes, as well as how these affect the appearance and appeal of the stone.

Ultimately, it’s the combination of these five factors that affects the overall clarity grade.

Location or Position Of Inclusions

Where an inclusion is located in a diamond plays a major role in determining how much harm it can do.

An inclusions found on the table of the stone is more prominent than those that may appear within the facets of the stone. Also, once placed in a jewelry piece, imperfections along the girdle or pavilion may not be as noticeable and be somewhat hidden by the setting.

Thus, the closer an inclusion is to the centre of the table, the greater its effect on the clarity grade.

The size of the inclusion has a significant impact on a diamond’s appearance and clarity grade.  Generally, the larger and more visible an inclusion is, the lower the clarity grade will be.

An eye-clean VS1 diamond will not have any inclusions that you can easily see with naked eye, whereas the same inclusion with a larger size will probably make the diamond an SI1.

Numerous inclusions in a diamond makes it unattractive. Diamonds with several inclusions, or inclusions that reflect multiple times through the facets that act as mirrors, get a lower clarity grade.  The bigger and numerous inclusions a stone has, the more likely they are to stop light from moving inside and bouncing around properly.

Relief is the contrast between an inclusion and the host diamond. Generally, the more an inclusion differs in brightness, darkness or color from the diamond, the more visible it is and the greater its impact on clarity.

For example, inclusions like crystals that are translucent or white have less impact on the stone than darker ones because colored inclusions are more noticeable and might lower the grade.

It refers to the type of inclusion and its inherent effect on diamond. Various types of inclusions impact the clarity and the grading of a gem.

For instance, pinpoints have a lesser impact because they are barely visible as compared to noticeable dark crystals.  Other inclusions like deep feathers can have a greater impact as they could cause a diamond to crack.

What Is The Diamond Clarity Scale?

The GIA established the clarity scale to bring standardisation and uniformity in diamond grading terminology, leaving no room for misinterpretation.

Before this grading system was implemented, terms like ‘pique’ and ‘loupe clean’ were used in trade to describe a diamond’s clarity.

The clarity grades are based on the visibility of inclusions and blemishes with 10× magnification.

The GIA Diamond Clarity Scale has six categories, some of which are subdivided, for a total of 11 specific grades for diamonds.

This is described as follows: –

No inclusions and no blemishes visible under 10x magnification.  Such stones are incredibly rare and command high prices, especially in large carat sizes.

No inclusions and only insignificant blemishes visible under 10x magnification. IF diamonds are rare and expensive and make up only 0.5% of diamonds used in rings and other jewelry.

Very Slightly Included (VS1 and VS2)

Minor inclusions that range from difficult (VS1) to somewhat easy (VS2) to see at 10x magnification.

Noticeable inclusions that are easy (SI1) or very easy (SI2) to see at 10x magnification, but not visible to the unaided eye.

Inclusions that are obvious under 10x magnification – and often visible with the unaided eye – which may affect the stone’s transparency and brilliance.

When determining the clarity of diamonds, expert diamond graders will judge the appearance of the diamond with a loupe and eye visibility, under controlled lighting conditions.

They assign a clarity grade to a diamond according to the standardized grading scale, after assessing its clarity characteristics and judging how readily they seem through a 10x loupe, which means the lens magnifies the diamond to look ten times larger than actual size.

On the technical side, gemologists turn to sophisticated tools such as a higher power microscope to identify the type of inclusion. Otherwise, it may be difficult to determine it just with a 10x magnification.

How Clarity Impacts The Cost Of A Diamond

There is a strong relationship between a diamond’s clarity, rarity and value. Clarity’s influence on a diamond’s value is directly related to the concept of rarity.

Diamonds with few or no clarity characteristics are rare and because rarity drives price, they will cost more. While the clarity can significantly impact a diamond’s cost, fewer inclusions in a diamond will typically have a higher price.

In most cases, it does not make sense to overpay for high clarity diamond because stones with lower grade can still look clean to naked eye and do not spoil the unmagnified appearance of the stone.

Clarity matters more in step-cut diamonds like emerald and asscher cuts because their wide facets create a mirror effect and inclusions are much more visible. Brilliant-cut diamonds, on the other hand, have many more facets that help to hide inclusions.

However, if a diamond has many large clarity features, or if they are mirrored by the diamond’s facets, they will be easy to see – no matter the shape or cutting style. Prices can vary from 15 to 25 percent between different clarity grades, and even diamonds in the same grade can vary anywhere from 5 to 15 percent.

Which Diamond Clarity Is Best

Most people assume that having a Flawless or Internally Flawless diamond is a good investment, but that’s not always the case. Although, such diamonds are the cream of the crop, but they are impeccably rare and expensive. Add in a larger carat weight with an ideal cut and you’ll pay significantly more, than if you opt for one with even microscopic inclusions.

Also, with normal wear and passage of time, your diamond can get blemishes such as scratches and abrasions, and you end up lowering its clarity grade.

The key to choosing a diamond clarity grade is to make sure you’ll have an eye-clean stone. None of the flaws in the diamond should be visible to the naked eye at a normal viewing distance.

The most popular grades that constitute the bulk of market are VS and SI. They are best sellers because of their affordability and look mostly clean to naked eye

If you’re buying an engagement ring, your best option without breaking the bank, is to look for diamonds in the VS1 or VS2 or SI1 range.

This is the value for money bracket, where you can’t see imperfections to the naked eye and opting for a lower-rated clarity diamonds often means you can opt for a high carat size.

Although clarity is an essential quality factor, the other 3C’s such as cut, color and carat also collectively influence the diamond’s appeal and value.

How To Clean An Aquamarine Ring

Where To Hide The Engagement Ring Box?