What Is Stabilized Turquoise? 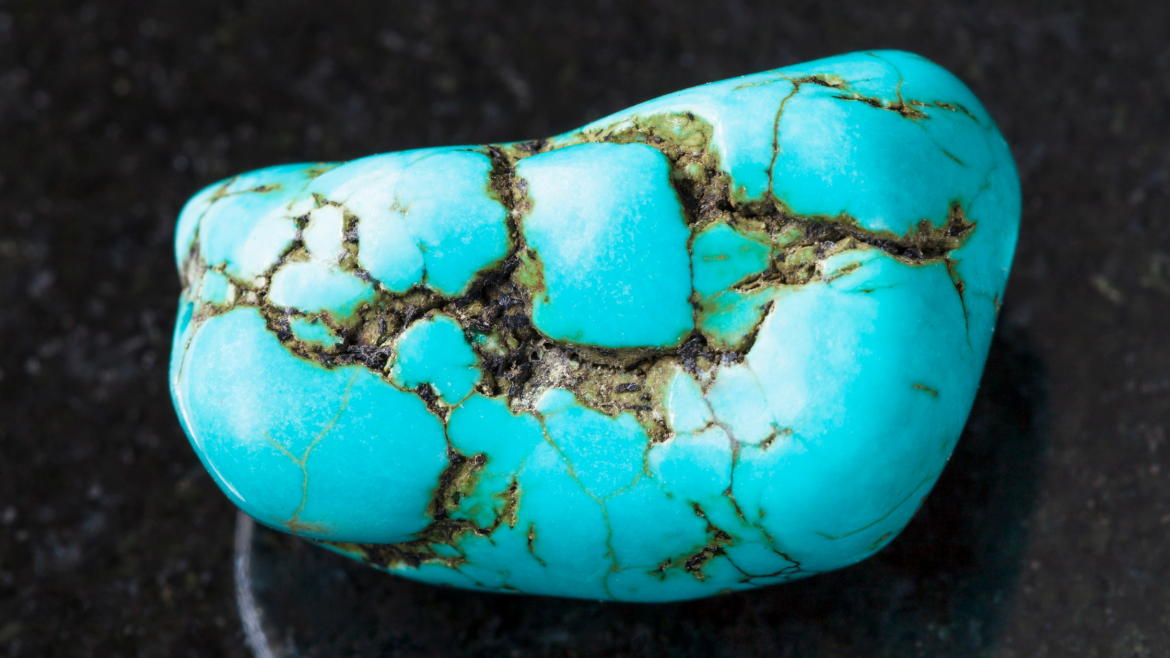 Reminiscent of tropical seas and the morning sky, Turquoise has long been revered by gem lovers & purveyors. Being one of the first gems to be mined and used in jewelry, it has been cherished for millennia across different cultures and locations. And if you have been currently shopping for turquoise jewelry you might have noticed the term stabilized jewelry thrown around a lot. So in this blog we are going to walk you through everything you need to know about turquoise and answer the common question “What is stabilized turquoise?”

Turquoise is a mineral composed primarily of copper and aluminum phosphates. In terms of transparency, it is semi translucent to opaque.

The color of turquoise varies from light to dark blue or blue-green, depending on how much copper and iron it contains. The copper in turquoise gives it its blue hue while the iron gives it green tonal variations.

Generally, turquoise is mottled and contains vesicles of matrix in the form of brown, yellow, white, or black in color. A fine black matrix composed of intricately arranged and evenly distributed points called ‘Spider Web’ presents a striking look.

A quick look at some of the key gemological properties of turquoise:

Today, most turquoise is hardened by some method or another since it is relatively soft compared to other gems. The most popular treatment method to harden turquoise is stabilization.

The stabilization process was first developed in the 1950’s by Colbaugh Processing Inc., a well known company owning the Kingman Turquoise Mine in Arizona.

It is a process in which a soft, chalk, low grade turquoise undergoes an impregnation that fills the porous areas with a colorless agent to enhance the stone’s appearance, luster, color and makes it harder and durable for use in jewelry.

Almost all of the natural turquoise available commercially today has been stabilized. As a result of the stabilization treatment, the turquoise becomes easier to cut and polish after being stabilized.

Why Is Turquoise Stabilized?

Straight from the mine, turquoise is a soft mineral that can get scratched easily because of the lower hardness.

In a typical mine, only a small percentage of production (between 3-5%) is hard enough for the stones to be used in jewelry without being treated. These rocks are naturally deemed all-natural and therefore pricey.

In contrast, most turquoise mined is soft, chalky, immature and lacking the necessary levels of copper silicates.

This type of stone would crack or break if cut and polished. Additionally, turquoise absorbs contaminants like oil, dust, fluids, and cosmetic residue, which causes it to discolor over time.

To combat such softness and porosity, turquoise is often stabilized with a stabilizer required to seal and strengthen it.

How Is Turquoise Stabilized?

The technique of stabilization is a closely guarded secret in the community. Each artisan has a different recipe for making resin or other stabilizing agent depending on the location of the mine and quality of the turquoise.

Early on, materials such as acrylic and plastic were soaked in turquoise for a long time, usually between 5 and 6 months. However, this was a slow and time-consuming process that resulted in darker and deeper colors.

Now, thanks to advances in technology, the high-pressure impregnation process is used to stabilize turquoise, with pressures reaching as high as 10,000 PSI. During the processing of low grade- chalk stone, a clear epoxy or plastic is added. Since turquoise is porous, resin fills in the tiny holes and crevices.

This is followed by a heating process to make the stone hard enough to polish.

A small percentage of stabilized turquoise is also ‘color enhanced’. Not only does this process harden the stone, but it also enhances its color.

Treatments or enhancements do not interfere with the makeup of the stone but simply brings out more color and overall beauty, which otherwise would have been missing.

A stabilized turquoise is still technically natural and not a fake or simulant.

How To Spot Stabilized Turquoise

When it comes to identifying stabilized turquoise, it can be challenging. With a host of synthetics, imitations and a variety of treatments used to enhance the material, it can be hard to tell what is stabilized, real, or fake turquoise.

However, with standard gemological tools and basic understanding of the material one could venture an educated guess, that the stone is stabilized.

stabilized turquoise often shows veins and cavities filled with a filler such as polymer, that are visible under magnification (loupe or microscope). Generally, stabilized turquoise has a brown/gray/black matrix. It has a higher luster and uniform color as compared to the untreated ones. Wax impregnated turquoise can have a speckled appearance similar to ‘cream of wheat’ effect.

stabilized turquoise often has a relatively lower S.G than untreated counterparts, due to the filler material. If the S.G is below 2.60 and the piece is of fine color, some form of impregnation technique is almost certain.

The cavities present in the stone fluoresce moderate white or yellow, whilst the stone remains inert, when exposed to long and short wave fluorescence indicating presence of a filler material.

If a hot needle is placed on natural turquoise there will be no penetration. Treated on the other hand, allows small penetration of the needle and also emits a distinct acrid odor, as the heat of the pin vaporizes some of the filler/stabilizer. This is why one can smell burning plastic while cutting a stabilized turquoise.

There are various treatments and simulants in the market which one needs to be aware of.

Faux turquoise ranges from obvious and downright ugly to convincing and appealing.

Some commonly encountered ones include:

Soft, chalk turquoise is crushed as powder and its fragments are mixed with plastic or glues and then pressed into blocks, followed by cutting. Such a mixture of turquoise powder and plastic/epoxy cannot be deemed genuine.

It is made out of dyed plastic and chemicals. Most block now is not turquoise but only colored resin. Often iron and pyrite are used to imitate the natural matrix.

It is a proprietary treatment, which is difficult to detect without chemical analysis done using EDXRF. This process uses an electrochemical method that involves soaking the stone in some chemicals along with a charge of electric current.  This results in a decrease of stone’s porosity, and the hardness and color increases. Such stones are called in trade as ‘enhanced turquoise’.

These are white/ grey minerals with black veins similar to turquoise and accept dye readily. If the color is very uniform and even, it is a red flag. Further testing with standard gemological tools can help separate these simulants from turquoise material.

Apart from these, there are numerous non-mineral imitations of turquoise available in the trade, such as plastic, glass and ceramic.

Should You Buy Stabilized Turquoise?

As one by one, the famous turquoise mines close, such as Bisbee, Sleeping Beauty, there are not too many options left to source the all natural hard material which is highly sought after.

Thus, processes such as stabilization are used to maintain supply of turquoise in the market and make the stone more affordable and available.

There is nothing wrong with enhancements as long as they are fully disclosed. The fact that an item is made from stabilized turquoise should be disclosed to the buyer prior to sales.

Stabilization adds a tremendous amount of value to otherwise unusable material. A stabilized turquoise is harder and less likely to break, so you will avoid repairs or damages. It lasts longer without fading/oxidising and retains the eye-catching bright colors.

How To Tell If Turquoise Is Real