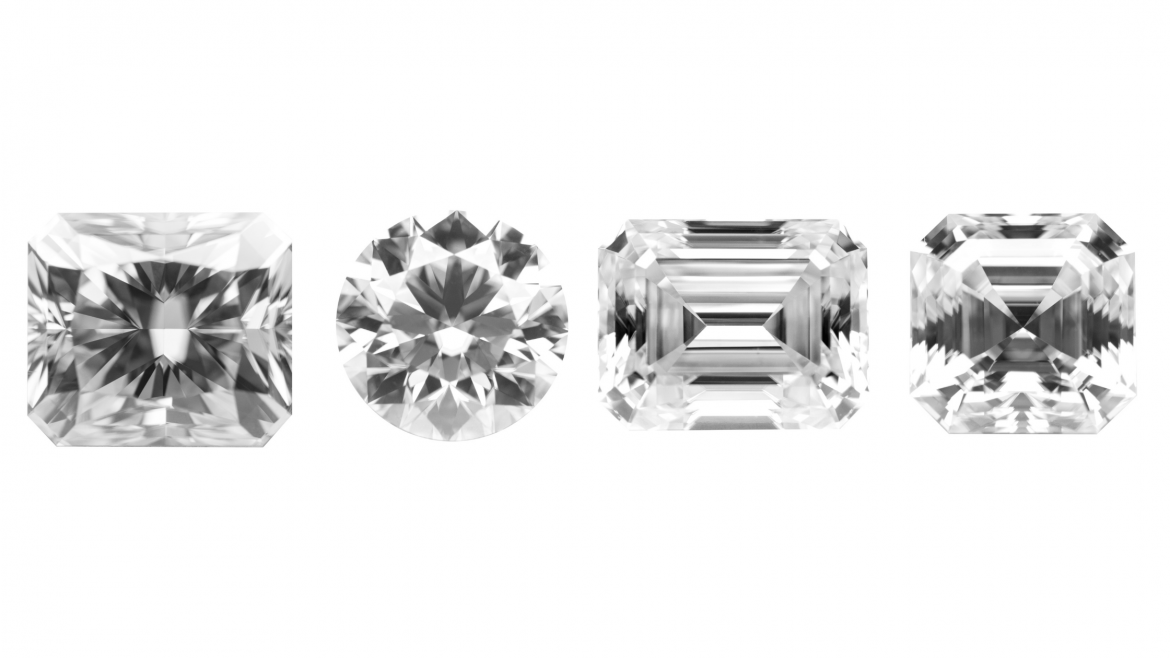 Moissanite is an alternative to diamonds that have been in the market for over 20 years. It was first discovered in 1893 by Henri Moissan and was named after him. Most moissanites are manufactured in laboratories because they are found in such small qualities naturally.

It is made from silicon carbide, which is why it has a high refractive index and produces a large amount of brilliance. The downside of this is that it is not as hard as diamonds, so scratches are much easier than with diamonds.

How Does The Cut Impact Moissanite?

Unlike diamonds, which are graded on the four C’s (Cut, Color, Clarity, & Carat), Moissanite gemstones are only graded on their color.

Despite the fact that moissanite is only graded on color, the cut is extremely important. The reason for this is that the cut will help determine the look and most importantly the sparkle of your gemstone.

The chemical makeup and internal structure of Moissanite result in extremely high light dispersion. Simply put, the fire or sparkle of the stone can be easily brought out.

The Best Cuts For Moissanite

Even though this is subjective, we believe the best cut for moissanite is either the round brilliant or oval cut. It is important to remember, however, that the cut of your diamond is subjective and comes down to personal opinion of what looks best. This is why we will cover all of the types of moissanite cuts we recommend in this section, including the round brilliant and oval cuts.

Like we mentioned before, the round brilliant cut is one of our favorite cuts for moissanite. The reason for this is that this shape has 58 brilliant facets. This simply means that this cut since it has the most facets will maximize the light reflecting from the moissanite and create that classic diamond look with a fantastic amount of sparkle.

The oval cut for moissanite is a popular option if the round brilliant isn’t your style and you’re looking for something a little more flashy. The reason for this is that elongated shapes will give the illusion of the gemstone being much larger than it really is. So, if you are going for big and flashy then oval cuts are a great choice. However, this cut does not provide as much sparkle as the round brilliant cut.

Whether it is for moissanite or diamonds, the princess cut is always an excellent choice. 57 facets make up this gorgeous cut, which has a square shape. This is due to its great shimmering effect in the light and a classic feel.

The emerald cut is another square shaped cut but what makes it unique is that it has longer step cut edges and only 46 facets. With fewer facets and longer edges, the emerald cut will not sparkle as much as some of the other cuts, but it is a classic cut that will impress anyone.

Similar to the princess and emerald cuts, the cushion cut is square in shape. However, it has its own unique characteristics, such as its 82 facets and a much greater sparkle than the emerald cut. Because of its unique look and fire, this is a very popular cut for moissanite.

There’s something a bit different about the pear cut compared to the other ones we’ve mentioned so far, as this cut is somewhat more traditional but has recently gained popularity again. Due to its unique pear shape and 72 facets, this cut has a vintage appeal.

Along the same lines of the pear shaped cut, the marquise cut is popular for its vintage look. A cut that has been around for hundreds of years, this cut boasts 54 facets and is known for making the wearer’s fingers look longer.

The round brilliant cut looks the most like a diamond. This is because the cut is one of the most common diamond cuts that provides the wearer with a lot of sparkle that gives the impression that they are wearing a real diamond.

Which Cut Makes Moissanite The Biggest?

The cut that makes moissanite look the biggest is the same as it is with regular diamonds, the oval cut. The reason for this is that the elongated shape gives the viewer the impression that the gemstone is much larger than it really is.

For example, if you put two rings of the same weight next to each other and one is an oval cut while the other is a round cut. Most people will look at the two rings and guess that the oval cut is slightly larger than the round cut.

With that being said, if size is all that you care about when it comes to choosing a cut, then pick the oval cut.

In conclusion, the best cut for moissanite is really up to the wearer. If they want a large looking ring, opt for an oval cut. But if they want something that feels vintage, consider the pear shape or marquise cut. Either way, we recommend just figuring out what style you personally like the look of the best.

How To Get Rid Of Wedding Ring Indentation