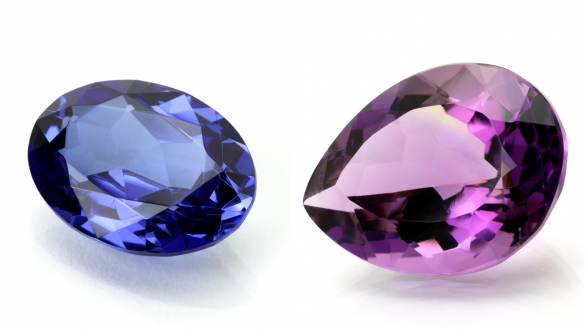 Tanzanite is amongst the unique gemstones to come from the earth. It is a variety of zoisite, calcium aluminum silicate, and blue in color. Tanzanite was first discovered in the northern part of Tanzania, Mererani, near Mount Kilimanjaro in 1967.

Since then, the gemstone has never been found anywhere else globally, thus earning the country name. Over time, the stone gained popularity because of its clarity and rarity.

Amethyst is a purple variety of quartz and owes its color to iron impurities. The name comes from the Greek word Amethystos, meaning “not intoxicated,” as the ancient Greeks believed it would protect against spiritual intoxication. The Amethyst was sacred to the god Dionysus, who is often depicted wearing a wreath of amethyst leaves.

The birthstone for February, Amethyst, is found worldwide, but some of the best gem-quality amethysts come from Brazil. This gem discovery in other parts of the world made it possible for jewelers to cut it in several shapes and sizes. However, this lowered the value of amethysts overall.

Amethyst is still a relatively affordable gemstone, especially when compared to diamonds, emeralds, and rubies. It is the most popular purple gemstone and can be found in various jewelry styles.

Differences Between Tanzanite And Amethyst

There are a few key differences between Tanzanite and Amethyst. Below, we list some of the most notable distinctions:

Tanzanite occurs in various colors like pink, green, and yellow. However, the blue color dominates in Tanzanite. On the other hand, Amethyst occurs in lavender, pale violet, or mauve. Purple is the dominant color in Amethyst.

Tanzanite is often cut in triangular shapes to show off its deep blue color. Amethysts are commonly found in a cushion or round cuts because of their clarity.

Amethyst is less expensive than Tanzanite. This is because Tanzanites are rarer than amethysts.

When it comes to hardness, Amethyst is harder than Tanzanite. Amethyst has a hardness of seven on the Mohs scale, while Tanzanite is only a six and a half.

Tanzanite is considered one of the rarest gemstones in the world. It is found in only one place on Earth (Tanzanite) and takes many years to form. While not as rare as Tanzanite, Amethyst is still considered a semi-precious stone and is found in Brazil, Uruguay, Zambia, and other parts of the world.

Tanzanite typically has few to no inclusions. On the other hand, Amethysts have inclusions often referred to as “the beauty marks of amethyst.”

What Are The Similarities Between Tanzanite And Amethyst?

Where Can You Purchase Tanzanite and Amethyst?

Both Tanzanite and Amethyst can be purchased from various local jewelry stores. They can also be found online through different online retailers. You should ensure that you buy from a reputable source to avoid any scams. When shopping for either gemstone, be sure to look for a certification of authenticity. This will ensure that you are getting a genuine stone.

Additionally, when shopping online, be sure to check the return policy in case you are not satisfied with your purchase. Do not forget to check out the review section before making your final purchase.

Tanzanite and Amethyst are beautiful gemstones that make great additions to any jewelry collection. Each gemstone has its unique features that makes it stand out. With the above information, in differences and similarities, you should distinguish between the two and decide which one is right for you.

Is A Longines Watch A Good Investment?